Andrew Giuliani — who on Tuesday announced plans to run for governor of New York — made his public debut when he was just 7 years old at his father Rudy’s 1994 inauguration as the Big Apple’s mayor. And as we’re about to remind you, the moment became classic material for then “SNL” star Chris Farley.

An excited, animated Andrew was by his dad’s side during the swearing-in ceremony, raising his hand and taking the oath as his dad did. A cute, father-son bonding moment captured for the world to see, for sure. But then it got, shall we say, awkward when the senior Giuliani went to the podium to deliver his inaugural address — and Andrew followed him.

Andrew hammed it up but got distracted from Rudy’s lengthy, no-nonsense message. I mean, it’s hard not to look at the little guy and completely ignore everything Rudy’s saying.

You can check out the original clip by clicking here. 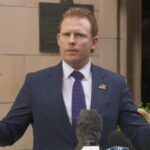 Also Read:
Andrew Giuliani, Son of Rudy, to Run for NY Governor in 2022

A few days later on “Saturday Night Live,” Farley lampooned the moment by slapping on a wig, snapping in some fake teeth and playing it to the hilt alongside Kevin Nealon playing the elder statesman. Beaming with love at Nealon as Rudy, Farley’s Andrew waved enthusiastically at the camera and blew kisses to the crowd, just as the real Andrew did.

Then Farley took it to the next level, climbing on the podium to be at the same height as his dad so he could give him a massive bear hug, squeezing him tightly as “Rudy” continued his speech unfazed. And his zeal crescendoed. A lot. Like, a lot a lot.

It’s a must-see for “SNL” fans. Check it out via the video up top. 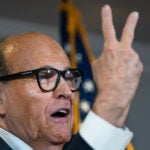