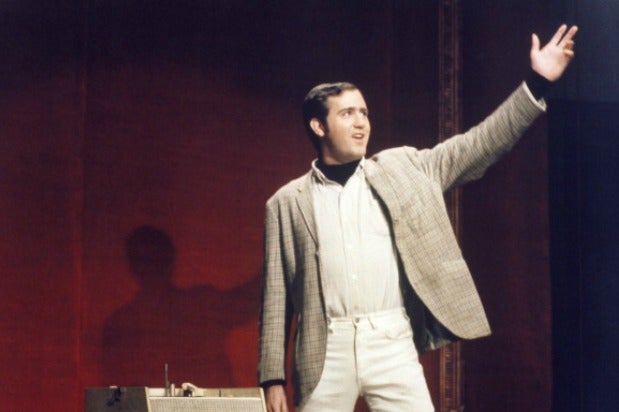 Andy Kaufman’s brother, who helped propagate speculation that the comedian may still be alive, says he’s been the victim of a hoax.

Michael Kaufman sounded like he might be was a hoaxster himself when he said Monday that his brother had apparently written him a letter in 1999 — and that he had a daughter. He made the comments at the Andy Kaufman Awards, where he introduced the woman.

But after The Smoking Gun revealed that she was an actress, Michael Kaufman told CNN’s Jake Tapper that he believes she was part of a scheme to trick him.

“Now that it’s Thursday, not Monday anymore, I believe I am part of a hoax,” Kaufman said. “I don’t believe she’s acting on her own, though.”

The speculation became so intense that the Los Angeles County Coroner’s office re-released the death certificate showing that the “Taxi” star died in 1984 of a rare form of cancer.

Michael Kaufman told Tapper he was at his brother’s deathbed. “I saw him emaciated. I saw him die.”

In another wrinkle, pro wrestler Jerry Lawler, with whom Kaufman famously feuded in the early 1980s, told CNN he would love a rematch with Kaufman if he were somehow still alive.

“It could be a great hoax in his honor, dreamed up by his friend Bob Zmuda and his brother, Michael. That would be something that would be in keeping with Andy’s tradition, but who’s to say?It could really be legit,” Lawler told CNN.

“There should be a WrestleMania rematch between Andy and The King,” he added. “We could rekindle the feud with no problem.”

Michael Kaufman said Monday that while going through his brother’s papers, he discovered evidence that he planned to fake his death and re-emerge at a restaurant on Christmas Eve, 1999. When Michael Kaufman arrived that night, he was given a letter purportedly from his brother. He read it at the awards.

Later he was approached by the woman claiming to be Kaufman’s daughter. The Smoking Gun reported that she was actually actress Alexandra Tatarsky, daughter of a 58-year-old psychologist.

He told Tapper he had questions all along about whether his brother was somehow alive.

“As Andy’s brother, you learn over the years, you know, to go with the flow, kind of,” he said. “So I have mixed emotions. I never allowed myself to get too excited, but I was always slightly skeptical.”