Andy Samberg‘s Emmys hosting performance was met with mostly positive praise for a job well done, but how does the “Brooklyn Nine-Nine” star feel it went?

“I am taking people at their word on reviews because I am sticking to my word and not looking,” Samberg told TheWrap Wednesday.

“I felt really good,” the “SNL” alum said. “When I walked out for the monologue, I was like, ‘Oh, wow, this is a new experience, I have not done this before.’ And I got a little nervous, but once the jokes started landing, I relaxed a little.”

“And then after the monologue was over, I relaxed a lot — and then I just had a blast,” he continued.

Samberg certainly seemed like he was having a lot of fun, and the crowd in front of him did as well.

“I felt nothing really missed in the room,” he said of his live reception as first-time Emmys host. “So, based on the live experience, with the 7,000 people in the room, I felt like it went really well — better than I expected.”

The comic, who made his bones doing Digital Shorts on “Saturday Night Live,” really embraced the opportunity to write, rewrite and even improvise on Sunday — a tool Samberg used quite effectively in between presenters as the three-hour evening wore on.

“A lot of it was on the spot,” he said about the of-the-moment material. “We were excited to try stuff like that, because that’s always how I love it when I’m watching at home: to feel like the host and the writers are interacting with the show and sort of experiencing it with the viewers. We were hoping things would happen that would allow that to happen, and we got a couple of good ones I thought.”

So, the big question: Would the actor behind Det. Jake Peralta ever host the Emmys again? It sounds like a semi-resounding, “probably.”

“I wouldn’t rule it out,” Samberg told us, reiterating, “I had a blast.”

If the Emmys deal with the network is renewed, the current Fox star could potentially get his next crack at the gig in 2019. One wrinkle in a potential return to the stage could be Sunday’s record low ratings, which were certainly impacted by going up against a primetime NFL game. 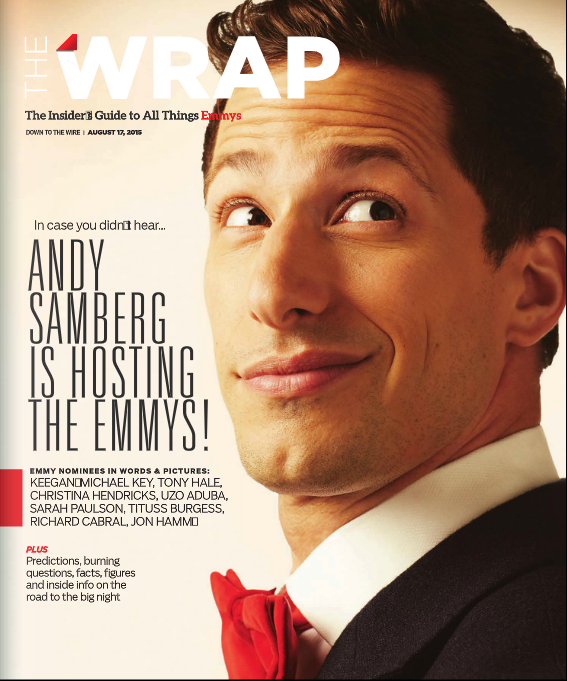