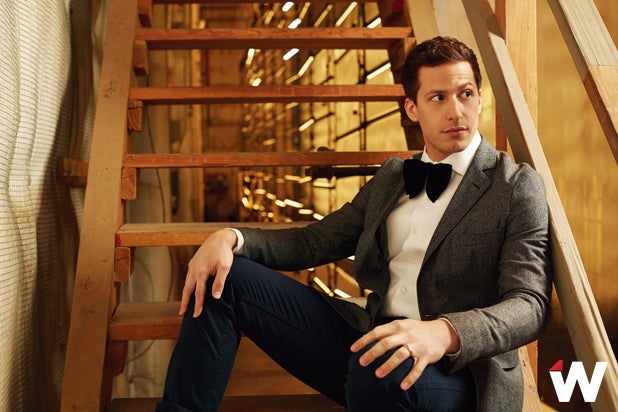 Photo by Patrick Fraser for TheWrap

This story first appeared in the “Down to the Wire” Emmy issue of TheWrap Magazine.

He feels the pressure. Sure, Andy Samberg has become one of the best-known comic talents of the last decade since he joined the cast of “Saturday Night Live” in 2005 and then broke out with Digital Shorts like the Emmy-winning “Dick in a Box.” But in the manic, overloaded pop-culture landscape of today, Samberg figures that you have to keep putting yourself out there to stay in favor with a sensory-overloaded audience.

“Sometimes,” he told TheWrap, “it feels like you have to be omnipresent to be relevant. There’s so much media, so many funny videos online, so many movies and so many TV shows that there is that fear you’ll get lost in the fray.”

This year alone, he appeared at the Oscars performing the “Lego Movie” song “Everything Is Awesome” … acted in Season 3 of the cop sitcom “Brooklyn Nine-Nine” … shot a Judd Apatow-produced movie with his pals in the Lonely Island (you remember their SNL Digital Shorts, right?) … did voice work for “Hotel Transylvania 2” and two episodes of the animated TV series “Major Lazer” … appeared on the “Saturday Night Live” 40th anniversary special … and made the very crude and very funny HBO tennis mockumentary “7 Days in Hell.”

And now, while he’s shooting the next season of “Brooklyn,” he’s prepping to host the Primetime Emmy Awards on Sept. 20, where he figures his job is to make the audience feel at home, riff on the television zeitgeist for a while and somehow figure out how to encompass the whole of what passes for TV in a few minutes of comedy.

“You know, the fear is that you do it and everyone hates it,” he said. ‘But you get that fear every time you try to make anything or do anything. It’s just a normal amount of fear.”

So here’s Andy Samberg, age 36 in the summer of ’15: sort of omnipresent, kind of fearless and ready to tackle the Emmys, at least during his occasional days off and on the weekends when he’s not shooting his TV show. By the way, “Brooklyn” wasn’t nominated for much and he’s OK with that, because he figures he’ll be up on that Emmy stage as a walking advertisement for the show.

How did he achieve this Sambergian ubiquity that makes him so suited to host the Emmys? Glad you asked. Here’s an eleven-step program to achieve comedy omnipresence.

1. Have a dream.
Growing up in Berkeley, California, Samberg figured out early on that he wanted to be funny. “I thought, you know, just something in comedy,” he said. “Whether it was performing or writing or standup or TV or movies, all of those things really appealed to me. As long as I was putting my energy into trying to write jokes and deliver jokes.”

2. Beyond that, have a very specific dream.
“When I was younger, I really wanted to be on ‘SNL,'” he said. “And that dream came true, which was crazy to start with. No one has that specific of a dream come true. Truly, when I was asked to audition for ‘SNL,’ it was further than I ever thought I would get. I figured that was going to be the pinnacle of it all.”

3. Have the ability to make Tina Fey laugh.
This came at the first of his two “SNL” auditions, which took place in 2005 when Fey was the head writer on the show. “They tell you that nobody’s going to laugh, so I went in the first time expecting silence, and determined to not let that shake me,” he said. “But then I distinctly heard Tina Fey laugh, which I will be forever grateful to her for. And I walked away thinking, ‘Well, I’m not gonna get it, but at least I didn’t embarrass myself.'”

4. Have a way to overcome dog-eat-dog environments.
While “SNL” is famously competitive behind the scenes, with cast members fighting to get their material on the air, Samberg was hired as a writer on the show alongside Akiva Schaffer and Jorma Taccone, two Northern California cohorts with whom he’d been making videos as the Lonely Island. “I was very lucky in that I got hired with my really good friends,” he said. “We were already a comedy team, so I came in with an incredible support system.”

5. Also have an ace in the hole.
“We were not hired with the understanding that we would make videos,” he said, “but the three of us had already been doing them for the Lonely Island website, and for Channel 101 and Comedy Central and Fox. So that was definitely our strongest skill set.”

And it turned out that videos, which can play while cast members are changing costumes and stagehands are moving scenery, were always in demand. “About halfway through the first season, Akiva and Jorma went and shot something on their own, and the ‘SNL’ people said, ‘We really like this–if you put the cast in it, we’re always looking for pre-taped pieces.’

“So we went out and shot some, and they started airing them. And the second one that aired was [the huge viral hit] ‘Lazy Sunday.’ And after that they said, ‘Yeah, keep makin’ em.'”

6. Get by without much sleep.
Samberg might not have succumbed to the “SNL” infighting, but he still found the schedule a backbreaker. “After a while it really takes its toll on you, because it feels relentless and the hours are just so incredible and so intense,” he said. “Especially for us, because we started doing a digital short every week, and as I got incorporated into the live shows more, it was basically like doing two shows a week.

“But you just do it because you have to, and because it’s the thrill of your life and you get such a rush from it. There’s really no other job like it, still.”

7. If you leave a big job, be ready to do whatever comes along.
“I hadn’t thought about it too specifically,” he said of his plans after he left “SNL” in 2012. “I thought it might be something with Akiva and Jorma. I did a few movies. I did a show in England. I did things as they came up. I was definitely open to a sitcom, but I wasn’t thinking, ‘That’s what I want to do.'”

8. Learn from your friend Amy Poehler.
Samberg listened to writer-producers Mike Schur and Dan Goor when they approached him with the idea for “Brooklyn Nine-Nine” largely because they were also involved with “Parks and Recreation,” starring fellow “SNL” alum Amy Poehler. “I thought, ‘Well, if it’s you guys, I definitely will do it,'” he said. “I loved ‘Parks and Rec,’ which was a similar situation for Amy, and I had seen how well that had gone for her. It seemed kinda like a no-brainer.”

9. And speaking of no-brainers, let somebody else do the writing sometimes.
“I’ll talk to Dan and sometimes I pitch ideas for ‘Brooklyn,’ but generally it amounts to them telling me what they’re thinking of doing, and me saying, ‘That sounds great.’ There’s nothing more difficult to me than conceiving of the thing you’re shooting. That’s where the real stress comes from–because unless you come up with something good, the whole show doesn’t exist. It lets you control your own destiny creatively, but it’s also really stressful because all the pressure is on you to do something that people will like.

“Whereas here, I know that we have an incredible writing staff, and they’re gonna handle that part. And I can just come in and shoot and add things on the fly and have fun with it.”

10. When you find yourself getting omnipresent, go with it.
The Lonely Island hadn’t planned on becoming stars on YouTube when they made their earliest videos–instead, those were designed to get them on TV and lead to a sketch comedy show with a musical component. The Internet success, he said, “was just fortuitous.”

In a way, Samberg tried to shrug off the other things that have made him such an inescapable part of pop culture, too. “I try to just do as many things as I’m excited about as possible,” he said. “We’ve been excited to do a Lonely Island movie since we were teenagers, so when Judd [Apatow] told us he would produce it if we wrote it, we were like, ‘Let’s write it!’

“I just did this thing with my buddy Murray Miller on HBO called ‘7 Days in Hell,’ and that was an idea we had for a long time. He got a deal at HBO, and I said, ‘Hey, we should make it at HBO.’ We pitched it, they liked it and we made it.”

Also Read: Andy Samberg, Kit Harington Leave It All on the Court in New '7 Days in Hell' Trailer (Video)

The varied projects are “nice,” he added, “in that they give me a bunch of different looks. But I also feel like if those specific things hadn’t come up that I was excited to do, I would also be totally happy just doing ‘Brooklyn.’ Or just doing nothing, if there was nothing I wanted to do.”

11. Know that if you play your cards right, you might even get beyond that panicky, where-is-my-next-job-coming-from? feeling.
“I am beyond it right now,” he said. “But I think it’s probably because I’m busy. As soon as it all dries up, I guarantee I’ll give you a different answer and I’ll be scared shitless.”