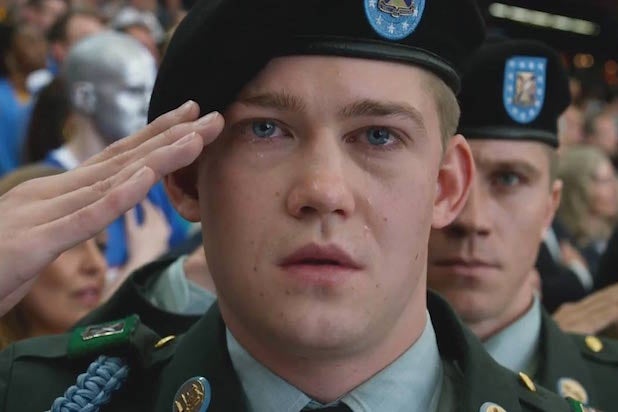 “I want to bring the audience into the movie,” he said of his new 3D film during a Q&A at Dolby Cinema at Vine Theater in Hollywood. “There is so much more to play with.”

Lee shot the movie in 4k, which displays four times the usual number of pixels on screen. It was also filmed at 120 frames per second.

There are pluses and minuses to filming double the frame rate, according Lee, who said it offers a much higher level of realism than traditional film — which suited his story about a young U.S. soldier (newcomer Joe Alwyn) who returns from the Iraq War as a hero.

“It’s a way to honor our troops,”  Lee said, explaining that he aimed to explore the new technology for dramatic purposes in showing flashbacks to battle sequences — and not just high-concept action and fantasy. “I want to capture what it really feels like.”

Since much more detail appears on screen, it would be easy for audiences to spot makeup on the actors. So, the cast went mostly without any at all. “There was no makeup… I wanted to study their faces — every little nuance,” said the “Life of Pi” director. “No artifice was allowed. So much is seen in their eyes, even the pores and their skin tone.”

Because Lee was working in an emerging medium, he had to do everything differently than what he has been used to. “I tried not to light like 2D. There were a lot of details and they have to look real, not stylish.”

The action scenes benefited, he said, explaining that filmmakers usually have to cut around the old 60 frames-per-second when it comes to fast movement. “Now we can film while a car is shaking. There’s no flickering, we now see [the actors]. It’s more exciting… there’s more dimension, light and clarity.”

Based on the celebrated novel by Ben Fountain, “Billy Lynn’s Long Halftime Walk,” goes inside the mind of decorated soldier Billy Lynn, who has gained fame after a battleground video that captures his heroics has gone viral. As he and his squad appear at an NFL game, he finds himself conflicted about his newfound fame as he reflects on his wartime experience. Sony is distributing the TriStar and Studio 8 production.

Lee discovered Alwyn, then a student, after a month of searching. “Two minutes into the reading — bing — done deal,” Lee said.

The book depicts Lynn as acerbic, satirical and wise beyond his years. But Alwyn has a natural propensity to be more “emotional and earnest,” Lee said, explaining that he molded the movie to Alwyn’s talents.

When it comes to his use of new tech, Lee emphasized, “There’s no reference here… We’re just beginning to learn. I want to take a leap of faith and see what it looks like.”

Jake Gyllenhaal starred as a teenager dealing with bizarre visions of a menacing figure in a rabbit mask named Frank in writer-director Richard Kelly's 2001 film.

It's been 15 years since the movie opened in theaters and is now considered something of a cult classic. With the help of the film's trivia page on IMDb, TheWrap has amassed six of the most mind-bending facts about the movie...