An exclusive four-minute trailer from the not-yet-finished apocalyptic thriller "Legion" was unveiled at Comic-Con Friday afternoon, showing a desolate desert town diner where a white-haired old woman warns of destruction and transforms into an evil creature.

When the darkness descends upon the town’s inhabitents, they must fight back against swarns of bees, explosions and winged evil angels that come as part of the apocalypse.

"Angels with machine guns, it felt like that was the right thing to do and the movie I wanted to see," director Scott Stewart said.

The film is not a religious picture, though the story of "Legion" is in the Bible. 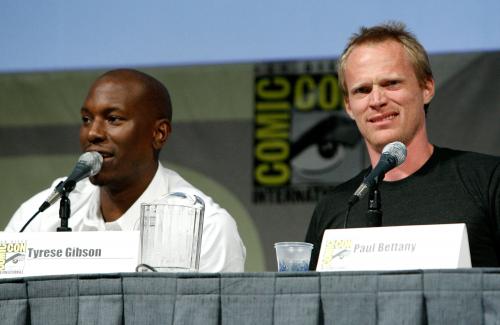 "Ultimately it’s about the characters and what they go through — and hopefully it’s a fun roller-coaster ride along the way," Stewart said.

Star Tyrese Gibson riled up the room by encouraging the crowd to scream louder upon his entrance and thanking the audience for making "Transformers" the most popular film in the world.

He said he wanted to be in the film because "these type of end of the world films do something for me."

"We shot the film in Santa Fe, and the most exciting part for me was getting to see Paul Bettany’s muscles," Gibson joked. "I think all of Alberquerque ran out of baby oil."

"I desperately wanted to make an action movie and felt flattered (they) saw me as a hero in this one," Bettany said of his experience in the film.

Bettany and Stewart are partnering next to shoot "Priest," about a priest who disobeys church law to track down the vampires who kidnapped his niece, out in 2010.