The story of Angelyne — singer, actor, model, artist, and proto-influencer — is intrinsically tied to the story of Hollywood, a place synonymous with illusion and transformation. Throughout the 1980s and ’90s, her buxom silhouette and blond bouffant hairdo could be found on billboards all over Los Angeles. It seemed to happen in the blink of an eye: Suddenly, Angelyne was everywhere, pushing all manner of merchandise from the trunk of a Corvette almost as recognizable as she was.

Attempts have been made to demystify her, to pierce that veil of pink lycra — The Hollywood Reporter’s Gary Baum has taken a few cracks at it on his own, including writing the 2017 exposé that revealed her real identity.

But with their five-part limited series “Angelyne,” series creator Nancy Oliver and star/executive producer Emmy Rossum are poised to take the deepest dive into the life of this Hollywood mainstay, a deceptively shallow subject if there ever was one. Because Angelyne’s sphere of influence extends well beyond southern California; before social media was created or anyone was trying to keep up with the Kardashians, she was famous for being famous, carefully cultivating an image for public consumption. 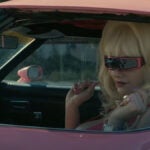 Also Read:
Emmy Rossum is Unrecognizable in Teaser for ‘Angelyne,’ as Peacock Sets May Premiere (Video)

Rossum leads the Peacock series as Angelyne, piling on the extensions and prosthetics (including a three-pound breast plate) to play the character across four decades, even approximating her speech pattern, which is best described as a sultry coo. The actor’s long been fascinated by this L.A. mainstay, who seems to have sprung fully formed from the imagination, like a figure from Greek mythology—but wearing sky-high heels. Even now, as she struggles to crowdsource the return of her billboards, Angelyne has an air of reinvention about her. Which must have made the prospect of disappearing into this role all the more appealing for an actor like Rossum, whose career up till now has been defined by her formidable yet big-hearted work on Showtime’s “Shameless.”

Angelyne the character regularly speaks in sentences that could be loglines for the series. Despite the elusiveness of its real-life inspiration — the real Angelyne refutes Baum’s claims, but ultimately backed out as a consultant for the show — the series is quite plain-spoken. It spells out its themes in the dialogue, which, in the case of Angelyne’s bon mots, sometimes come from her exchanges with Baum (whose reporting inspired the show).

Characters like Harold Wallach (Martin Freeman), one of several stand-ins for the members of Angelyne’s coterie, often give voice to the show’s ostensible insights: that her billboard takeover may have been “making some radical social statement. Now I’m not sure what that statement is, exactly. But maybe that’s why it’s so inspiring.” Sometimes, they offer more general platitudes: “What happens to all dreams? Life got in the way.”

This often prosaic writing is at odds with the otherwise heightened tone of the series, which grows more self-aware with each of its five episodes, until it’s winking with both eyes. Like its namesake, the show wants you to know it knows you’re watching; elements like the bad old age makeup highlight the artifice on display. And when Rossum as Angelyne talks directly to the camera, she isn’t addressing the documentary makers so much as the audience at home. But then there’s fourth wall-breaking on top of fourth wall-breaking, with Angelyne showing up in other characters’ talking heads to refute their claims.

None of these people are reliable narrators, it seems to suggest; even a journalist like Jeff Glasner (Alex Karpovsky, as the Baum character) is shown to have an agenda. He explains his pursuit of Angelyne’s real identity by saying that “People were meant to have their fantasies taken away.” But ultimately, the series seems more credulous of Angelyne than not. After all, where’s the harm in espousing (through the requisite layer of irony) the multi-hyphenate’s unrelenting positivity and extending her fame ever so slightly? Probably none, though it rarely makes for more than a fitfully engrossing watch.

Rossum’s transformation aside, there’s nothing revelatory in this Peacock series, which gives away the game in the second episode. Speaking to an unseen interviewer, the lead character observes that “Nowadays it’s all about how many Instagram followers you have, all of which is nonsense. But I started all that.” That connection, like so many others, is quickly glossed over by another bit of dialogue that could double as a show pitch. Aside from an imagined encounter between Angelyne and Hugh Hefner (the former famously eschewed the Playboy founder’s offer to appear in his magazine), Oliver’s series mostly traces the rising and falling action of Baum’s reporting. Which isn’t to say that there aren’t depths left to plumb in her life, but that “Angelyne” only manages to skim the surface.

“Angelyne” premieres May 19 on Peacock. 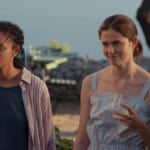 Also Read:
5 New TV Shows to Watch This Week: From ‘Angelyne’ to ‘The Time Traveler’s Wife’