While may movies at Sundance show up with desperate sales agents in tow, others merely allow for the opportunity to bathe in the massive media exposure the festival offers before continuing on their guaranteed route to distribution. 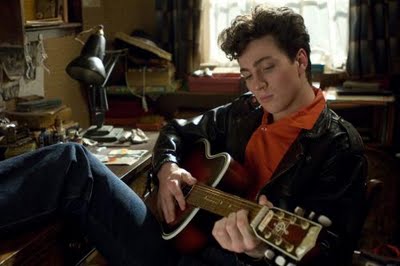 "Nowhere Boy," director Sam Taylor Wood’s account of John Lennon during his angst-riddled teenage years, fits the latter slot. A typical awards bid from the Weinstein Company, it contains a string of melodramatic performances and the sort of historical backdrop that’s bound to get some attention.

Of course, as was the case with "Across the Universe," the built-in Beatles hook runs the risk of serious backlash, although "Nowhere Boy" is probably safe from such ire — but it’s unlikely to gain much traction with the wider public all the same.

As Lennon, 19-year-old Aaron Johnson puts on an obvious star-making performance, playing a moody, assertive version of the bandleader-to-be with furtive glances and plenty of sexual energy. (His lead role in the SXSW opening night film "Kickass" is bound to further help his career momentum later this year.)

Kristin Scott Thomas, as the hardened aunt who raised him in place of his absent mother (Anne-Marie Duff), does her usual tough-as-nails routine. Duff, however, bats her eyes for the camera as an over-the-top characterization of the sexed-up train wreck responsible for her son’s familial problems. Wood avoids most blatant references of Beatles mythology, allowing the legacy to hover just off the screen.

Yet "Nowhere Boy" has little momentum other than the music itself. Hardly a quintessential entry in the decade-spanning canonization of the band’s origin story, it still doesn’t entirely muck it up. At the same time, in a world where people devour the Beatle’s epic rise to fame in every medium — including, most recently, videogames, courtesy of The Beatles Rock Band — "Nowhere Boy" doesn’t take it anywhere new.