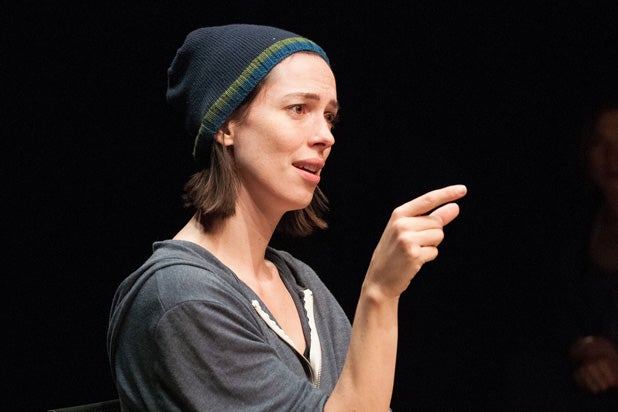 Claire Lizzimore shows herself to be a master of theatrical legerdemain with only her second play, “Animal,” which opened Tuesday at Off Broadway’s Atlantic Theater Company. As its main character descends further and further into madness, Lizzimore puts us right in that vortex of her downward spiral. By only scene two of this 90-minute play, we’re already unsure whether the characters on stage are stand-ins for someone else or if, in fact, they even exist.

Florian Zeller did something similar with his Alzheimer’s play, “The Father,” but occasionally included extended moments not from the title character’s point of view. To her credit, Lizzimore never provides scenes for us to catch our balance. Her character Rachel (Rebecca Hall), along with anyone watching her, continues to flounder emotionally until the very end. Unfortunately, it’s at the end that Lizzimore explains everything for us in a scene not unlike the final reel of “The Snake Pit” or some other 1940s movie about mental illness.

The nature of Rebecca’s illness should not be known before seeing “Animal.” It would ruin the real fun of seeing the play. “Fun” is the right word, too, because “Animal” doesn’t provide a very profound analysis of the mental condition on display here. Lizzimore’s play is, however, very flashy theater.

Also Read: 'Building the Wall' Theater Review: A View of Post-Trump America Both Powerful and Preposterous

In her last New York theater outing, Hall gave a stunning portrayal of a mad woman in the Roundabout’s revival of “Machinal.” As Rebecca, she’s only slightly less effective with somewhat less classic material. The actress presents the human equivalent of the bass clef here, and in her fury is never strident. It’s a big performance, and director Gaye Taylor Upchurch is wise to mute the other actors, even a few (Kirstin Griffith, David Pegram and Fina Strazza) whose functions can’t be mentioned here.

Hall, Upchurch and Lizzimore accomplish one very important thing that’s sorely missing in most dramas about mental illness. They never stoop to make Rachel sympathetic, or at least sympathetic in the typically warm and fuzzy ways that films like “Shine” and “A Beautiful Mind” do.

In fact, you may find yourself identifying more readily with the two very mild-mannered men who care for Rachel: her shrink (Greg Keller) and her husband (the charismatic Morgan Spector). They’re saints and, perhaps, too understanding of Rachel’s problems for her own good — or the good of the play, for that matter.

Also Read: 'The End of Longing' Theater Review: Matthew Perry Recycles as Both Playwright and Star

After seeing “Animal,” I Googled Rachel’s illness and did not find the most theatrical attributes of her condition among the many symptoms listed. This is not to say they don’t exist in some extreme cases. I don’t go to the theater to see the ordinary. I go to see something else, and “Animal” delivers the extraordinary.

Its final let’s-explain-everything scene, though, is unsatisfying. Rebecca steps out of character for a moment to play op-ed contributor and lash out at the men in her life, accusing the male race of not having done enough to study her condition. Since Lizzimore created these two male characters, they’re the last guys in the world who should be getting a bad rap.