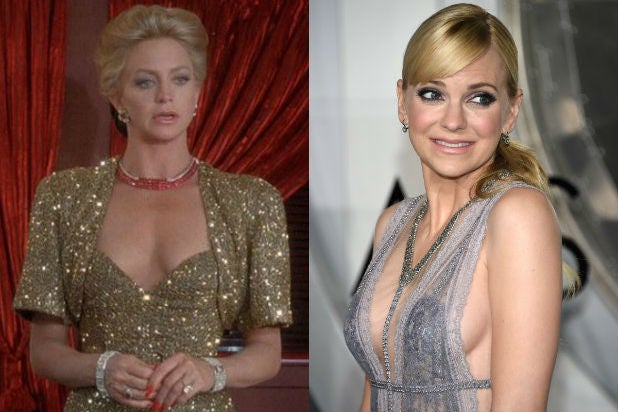 The beloved Goldie Hawn comedy “Overboard” is finally getting a big-screen remake after 30 years — but finding a concept that floats has been harder than anyone imagined.

The film industry hasn’t been kind to actresses looking to take on Hawn’s old parts. Even Jennifer Lopez couldn’t get a remake to sail. But MGM announced an update of the film Monday that will make a simple change to a new version starring Anna Faris and Mexican film star Eugenio Derbez: It will swap the genders of the two lead characters.

This new imagining will see Faris play a version of Kurt Russell’s character in the 1987 Garry Marshall original. Russell, Hawn’s real-life partner, played a lowbrow handyman who convinced Hawn’s wealthy, amnesiac heiress that he was her husband.

Faris shared her love of Hawn during an appearance on RuPaul’s podcast “What’s The Tee?“

“I worship her,” Faris said, speaking in the breathless tone many stars of her generation reserve for Hawn, like Amy Schumer, who lured the legend out of pseudo-retirement this May for Universal’s “Snatched.”

“Here’s the thing. Stepping into those shoes, it feels so — I don’t know,” Faris said nervously.

Faris agreed. You can hardly blame her for the trepidation.

Lopez tried to remake “Overboard” with MGM in 2010, with Will Smith on board to produce and a script polish from original screenwriter Leslie Dixon. The “Boy Next Door” star was panned for treading on the aforementioned sacred ground, and the remake eventually fell apart.

In 2015, Rebel Wilson announced that she was attached to star in an update of another Hawn favorite, “Private Benjamin.” That decision was questioned by, among others, director Nancy Meyers, a writer and producer on the 1980 original.

“I’m not in charge, you know? I don’t own it, but I like the one with Goldie Hawn,” Meyers told Entertainment Tonight at the time.

The invective for Paul Feig’s all-female “Ghostbusters” adaptation will likely go down in history, considering the film’s first trailer ranked as YouTube’s most-disliked ever when it was released last year.

The ground seemed much softer for last summer’s announcement that Channing Tatum and Jillian Bell would remake the Tom Hanks-Daryl Hannah classic “Splash” — and also swap gender roles, with Tatum playing the beautiful undersea creature Hannah played in the ’80s.

Faris has amassed a large following thanks to her flighty-but-empowered roles in films like “The House Bunny” and “What’s Your Number?”

Taking on the folksy (if not scheming) attributes of Russell’s “Overboard” character, however, spares her the punishment of direct comparison. It’s also a reintroduction to the movie market for Faris, who is on her fourth season as the lead of the CBS sitcom “Mom.”

“I was having this insecurity of, ‘I’m a mom now, does this industry view me as a mom? Where is my place in this industry? Is this a sign?'” Faris told RuPaul of leaving film for TV.

“I didn’t want to be one of those people that hung on to Hollywood without reading the signs that it was time for me to go. I wanted to leave before they booted me,” Faris said.

But Hollywood only booted her to “Overboard,” and we’re happy to go along.