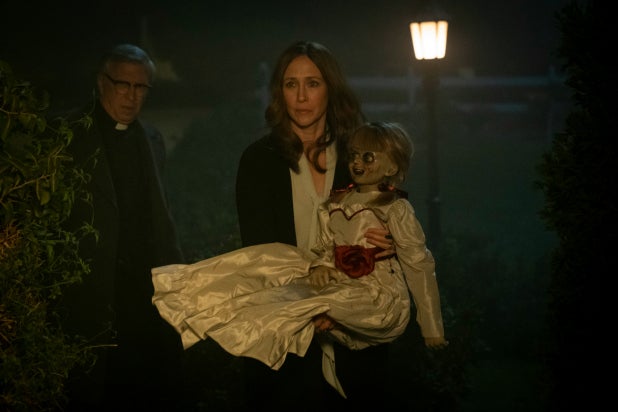 While “Toy Story 4” is expected to stay No. 1 at the box office for a second weekend, two smaller budget films will try to carve niches for themselves in between the Pixar film and next week’s “Spider-Man: Far From Home.” One is Universal/Working Title’s Beatles-inspired comedy “Yesterday,” while the other is Warner Bros. and New Line’s latest installment in the “Conjuring” series, “Annabelle Comes Home.”

“Annabelle” will be the first to enter theaters, opening Tuesday night for previews before opening on 3,525 screens on Wednesday. Warner Bros. is projecting a five-day opening of $30 million, while independent trackers are projecting an opening closer to $40 million. By comparison, the last film in the “Annabelle” series, “Annabelle: Creation,” opened to $35 million over three days in August 2017.

Since its launch six years ago, the “Conjuring” franchise and Blumhouse have driven horror’s increasing presence at the box office. The genre often yields production budgets below $30 million, the opportunity to release against bigger blockbusters thanks to that lowered financial risk, and a higher return on investment. New Line has stood at the forefront of that, breaking horror box office records with “It,” which grossed $700 million worldwide last year against its $30 million budget.

The five “Conjuring” films have also been profitable, grossing a combined $1.5 billion worldwide against a combined production budget of just $103 million. The series has also allowed New Line, the studio that was known in the ’80s as “The House That Freddy Built,” to reestablish itself as one of the top horror outlets in Hollywood with “It: Chapter Two” coming out in September.

“Annabelle Comes Home” catches up with the infamous doll after Ed and Lorraine Warren (Patrick Wilson and Vera Farmiga) placed it in their collection of possessed items after the event of “The Conjuring.” Now, Annabelle brings forth all the evil spirits in that collection, attacking the Warrens’ daughter Judy (Mckenna Grace) after they are foolishly unleashed by her two babysitters (Madison Iseman and Katie Sarife).

Gary Dauberman, writer of the previous “Annabelle” films, returns to write the screenplay of the latest installment as well as make his directorial debut. Critics have been somewhat positive with a 64% score on Rotten Tomatoes.

“Yesterday,” meanwhile, is looking at a quieter opening weekend on Friday as Universal projects a $10 million opening from approximately 2,500 screens. Trackers are projecting an opening in the low teens.

The film stars Himesh Patel as Jack Malik, a down-on-his-luck musician whose life changes forever after a strange global blackout leaves him in a world where nobody has heard of the Beatles except him.

With knowledge of the band’s hit songs, Jack uses them to rise to stardom as the greatest singer-songwriter ever, but risks losing his love Ellie (Lily James) in the process. Danny Boyle directs from a screenplay by Richard Curtis, with Kate McKinnon also starring and cameos from Ed Sheeran and James Corden.

Finally, Disney and Marvel Studios will re-release “Avengers: Endgame” in theaters this weekend, featuring a sneak peek of “Spider-Man: Far From Home,” an unfinished deleted scene, and a special poster of Iron Man’s Infinity Gauntlet available to attendees in select theaters. “Endgame” currently has a global box office total of $2.75 billion, putting it roughly $38 million away from passing “Avatar” as the highest grossing film of all time.