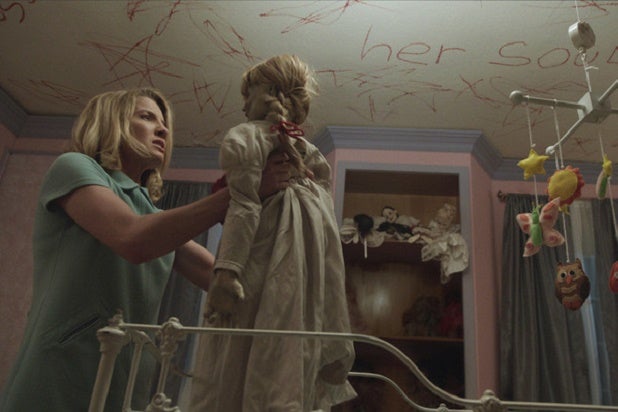 The horror movie “Annabelle” settled for second place behind “Gone Girl” at the domestic box office this weekend, but the opening weekend for the micro-budgeted demon doll tale is nothing but a financial triumph for New Line.

Monday’s final figures show the race was even closer than it looked Sunday. “Annabelle” finished with $37.2 million — well past projections and less than $380,000 behind the Ben Affleck-David Fincher thriller from Fox and New Regency. Add in a better-than-expected $23.6 million haul from overseas, and “Annabelle” grossed $60.8 million at worldwide box office in its first weekend — or roughly nine times its $6.5 million production budget.

It was easily the biggest horror movie opening of the year, and provides an adrenaline shot for the genre, which had been struggling at the box office.

“Annabelle” is a spin-off from last July’s breakout hit “The Conjuring,” which opened to $41.8 million and went on to make more than $318 million worldwide. All that on a $20 million budget made making a sequel or spinoff an easy call, but give New Line and producer James Wan credit for turning “Annabelle” around quickly. That meant “The Conjuring” was still fresh in moviegoers’ minds, a connection the studio’s marketing team hammered home.

“I think that made a difference, and that ‘brand loyalty’ had a lot to do with it breaking out,” said BoxOffice.com vice president and senior analyst Phil Contrino. “It also shows that they’re in great shape on ‘Conjuring 2’.” New Line has that one slotted for October 2015.

The critics weren’t keen on the R-rated “Annabelle,” directed by John Leonetti and starring Alfre Woodard, Annabelle Wallis and Ward Horton. It has just a 32 percent positive rating on Rotten Tomatoes. But audiences — which were evenly split gender-wise and 54 percent under the age of 25 — gave it a “B” CinemaScore.

Also read: Nic Cage’s ‘Left Behind’ Doesn’t Have a Prayer at Box Office

That’s a higher mark than tough-grading horror fans usually give out and, unlike most comparable films, “Annabelle” admissions didn’t drop significantly from Friday to Saturday. Those factors suggest “Annabelle” could have more staying power than most other chillers, and an $80 million domestic total seems within range.

That, combined with the overseas returns — “Annabelle” did 20 percent better than “The Conjuring” in comparable foreign markets — means Warner Bros. and New Line are looking at some very healthy demon doll dividends.