Megan Ellison’s Annapurna Pictures has hired Adam Paulsen, formerly of Valparaiso Pictures, as its executive vice president and head of film and Jack Parker as a creative executive, the company announced Monday.

Both Paulsen and Parker will report to CCO Sue Naegle and COO Chris Corabi. They join a film team that also Jess Biddle, Annapurna’s director of development.

As part of Paulsen joining the company, Annapurna will also acquire most of Valparaiso Pictures’ film slate. Valparaiso’s founder David Carrico, a tech-entrepreneur turned producer, will remain attached to the projects as an executive producer. Valparaiso Pictures was founded in 2017 by Carrico as a production and finance company that empowers filmmakers to take creative risks. 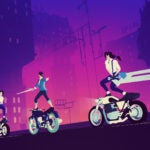 Paulsen most recently was Valparaiso Pictures’ managing partner of Valparaiso Pictures, and he previously was VP of Film at 30WEST, overseeing their “Financier Advisory” business. Prior to that he spent nearly five years at CAA where he worked as an agent in the Media Finance Group.

Parker worked as a film and television executive at Valparaiso Pictures. He was also a co-producer on the Sundance film “On the Count of the Three” from director Jerrod Carmichael, which Annapurna acquired out of the festival this year for $2 million and will be released in partnership with MGM’s Orion Pictures. Parker also spent three years at CAA in the motion picture talent and non-fiction departments.

Annapurna will next begin production on Universal’s “She Said” starring Carey Mulligan and Zoe Kazan, followed by “Landscape With Invisible Hand,” which is written and directed by Cory Finley and stars Tiffany Haddish.