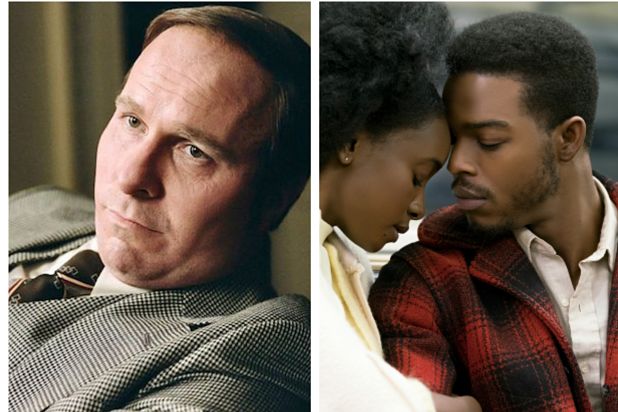 As Annapurna’s second year in the movie distribution business comes to an end, the studio is looking for a serious box office hit to help plant its flag in the indie box office scene. To this end, they are turning to two films made by recent Oscar-nominated directors: Barry Jenkins’ “If Beale Street Could Talk” and Adam McKay’s “Vice.”

“Beale Street,” which opens Friday in New York and Los Angeles and goes wide the weekend before Oscar nominations are announced, has long been expected to be an awards contender — and awards buzz usually translates to better box office results. Based on James Baldwin’s classic book and made by Jenkins with much of the team that helped him make his Best Picture-winning “Moonlight,” the film earned critical acclaim after its Toronto premiere, made the National Board of Review and AFI top 10 lists and earned three Golden Globe nominations last week.

But “Vice” is another story. Aside from interviews with lead star Christian Bale about the weight he put on to play Dick Cheney, Adam McKay’s follow-up to “The Big Short” wasn’t seeing a lot of awards buzz. Then the Golden Globe nominations came in, and “Vice” ended up leading the field with six nominations. That included Best Picture — Musical or Comedy, screenplay and director nods for McKay and acting nominations for Bale and co-stars Amy Adams and Sam Rockwell.

If either of these films can perform well at the box office, it will be a big help for Annapurna’s still-fledgling distribution wing. When it launched last year with Kathryn Bigelow’s “Detroit,” audiences largely ignored the unflinching police brutality drama, as it made $16.7 million at the box office against a $40 million budget. The struggles continued with “Professor Marston and the Wonder Women,” a biopic about the creation of Wonder Woman that only made $1.5 million.

But in July of this year, Annapurna had its first win with the Sundance hit “Sorry to Bother You,” a shocking satire from rapper Boots Riley that became one of the most talked about indie films of the summer. The film made $17.4 million with a screen count that peaked at 1,050 theaters, a third of what “Detroit” expanded to.

Unfortunately, the success was followed with more struggle. In September, Annapurna couldn’t convert the praise for the Jacques Audiard western “The Sisters Brothers” into success, as the film only made $3.5 million.

A month later, Annapurna’s film division head, Chelsea Barnard, left the studio, and two of the projects Barnard was overseeing — an untitled biopic about Fox News and Roger Ailes and “The Hustlers at Scores” starring Jennifer Lopez and Constance Wu — were dropped from the slate. The Ailes biopic was dropped just days before shooting was set to start, as Annapurna founder Megan Ellison took over the film division.

After all this turbulence, Annapurna is now entering its first major awards campaign, and the question is what sort of trajectory it will end up taking. On one hand, it could end up like “Moonlight” distributor A24, which has risen as an arthouse darling with films like “Lady Bird” and “Eighth Grade” since first stepping into the arthouse market five years ago.

On the other hand, there’s Open Road Films, which spent two years coasting off its Best Picture victory for “Spotlight” but never had a hit after that, first merging with IM Global to become Global Road Entertainment before filing for bankruptcy this past September.

“When you’re in business for the awards, it’s a tough business to be in. Just ask Miramax, Open Road or some other studios that aren’t around anymore,” Exhibitor Relations analyst Jeff Bock told TheWrap.

“But it does take time to build and maintain that reputation as a studio that puts out quality films that regularly contend for awards. Annapurna could take a big first step if ‘Vice’ or ‘Beale Street’ can make $75 million or earn some major nominations at the Oscars.”

For aspiring awards contenders that get NY/LA releases at this time of year, the benchmark for a strong limited opening is a per-screen average of around $50,000. But for “Beale Street,” a dream start would be one that matches or beats the $100,519 PSA that “Moonlight” earned in October 2016, a sign that Jenkins has become a must-watch director for arthouse moviegoers. “Beale Street” will expand to 65 screens on Christmas Day, 350 screens on Jan. 4 and nationwide on Jan. 18.

“Vice,” meanwhile, will be held up against Adam McKay’s Oscar-nominated “The Big Short,” which had a per-screen average of $88,000 in December 2015 and a wide opening of $10 million on Christmas weekend. The question will be whether McKay’s satirical approach will work in the era of Trump, as conservative audiences will likely avoid this biting take on Dick Cheney and the Bush presidency while liberal audiences have favored more inspirational political films like “RBG.” The political thriller “The Frontrunner” bombed last month with just under $2 million grossed, while Michael Moore’s “Fahrenheit 11/9” didn’t do much better with $6.3 million.

For now, “Vice” is looking to start on a similar level to “The Big Short,” with an estimated $14-15 million opening week after its Christmas Day release. It will then look to leg out through January as “The Big Short” did, earning a $70 million domestic total and $133 million worldwide. But such a total may not yield as much of a profit as “The Big Short” did, as insiders told TheWrap earlier this year that “Vice” came with a budget of $60 million, little more than double the $28 million of “Big Short.” Annapurna has declined to comment on the budget.