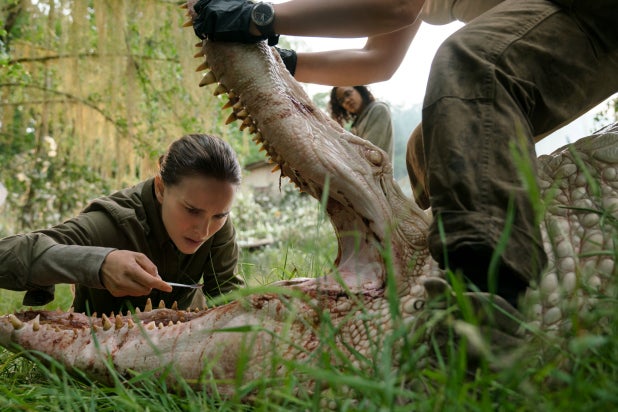 A psychological mystery laced with environmental disaster and alien-scary juju, Alex Garland’s elegantly unsettling “Annihilation” is here to shake up your night at the movies in the most mind-bendy way possible, but without foregoing the pleasures of an ambitious sci-fi entertainment.

If you’re there for the empowering presentation of an all-female, racially mixed cast of intrepid scientific professionals — played by Natalie Portman, Jennifer Jason Leigh, Tessa Thompson, Tuva Novotny (“Borg McEntoe”) and Gina Rodriguez — or the title’s promise of perilous chills, you won’t be disappointed. But if you allow this intelligent grab-bag of influences to cover your head completely and control the oxygen levels, you may find it does a craftier job of igniting and confounding one’s senses about the big questions (identity, progress, discovery, mortality) than last year’s misfired bid for fantastic grandeur, “Blade Runner 2049.”

After the cerebral cool of his if-then android chamber drama “Ex-Machina,” which showed he could direct a sci-fi tale as well as he’d been writing them (“28 Days Later,” “Sunshine”), Garland has thrown open the doors for a what’s-out-there saga, adapted from Jeff VanderMeer’s trilogy-launching 2014 novel, in which the notion of uncanny sentience carries biologically wild and philosophically trenchant implications that horrify as much as they fascinate.

The set-up involves two enigmas: one domestic, the other cosmic. At home, ex-Army biologist-professor Lena (Portman) encounters the unexpected return of her husband Kane (Oscar Isaac) from a secret military mission, one which has rendered him disoriented and off-putting, not to mention deathly ill. Sequestered by federal authorities after trying to get him medical help, Lena learns from cagey psychologist Dr. Ventress (Leigh) that Kane was part of a team exploring an unexplained region, likely extraterrestrial in origin, that’s been expanding since it was discovered on the coastline. Many have entered what’s been dubbed the Shimmer (for its visibly tremulous perimeter wall); until Kane, none had returned. Eventually, it’s feared, entire cities may be swallowed up.

In lieu of another ill-fated military incursion, Ventress instead corrals a science-tipped squad that includes Lena, who’s drawn to the question of what altered her husband, and three other educated pros: gung-ho paramedic Anya (Rodriguez), forthright anthropologist Cass (Novotny), and withdrawn physicist Josie (Thompson). Armed with guns, brains, and curiosity, the quintet make their way in, well aware that the prevailing theories are that previous teams either got killed by something, or killed each other.

The truth is a little of both, in the way recognizable surroundings don’t need much variation to suddenly feel unwelcoming and dangerous. Inexplicable time distortion and mutated plant life in the verdant swampland both prove flummoxing enough for the team, but then a succession of animal attacks, and encountering the last team’s base of operations, lead to even weirder, grislier discoveries that suggest that whatever’s behind it all is creating its own form of ever-generating nature. And no organism is safe.

Of course, “Annihilation” is itself a succession of metamorphoses, all smoothly handled by Garland. It starts with melancholic strains reminiscent of the personal woes that underscored the events in “Arrival,” segues to the kind of eerie topographic-psychic landscapes that marked  “Stalker” and “Apocalypse Now,” plays around in the nerve-jangling, invasion-suspense waters of “Alien” and “The Thing,” and eventually — when Lena reaches the lighthouse that supposedly holds the key to the Shimmer’s origins — waltzes with the phantasmagoric à la “2001: A Space Odyssey.”

But it all holds together somehow as a singular journey into the unknown, the story’s metaphors for post-traumatic self-harm and self-healing — not to mention the unknowability of others — made especially resonant by the stellar collection of actresses assembled. Portman’s mix of vulnerability and flintiness, stretched across a narrative that includes flashbacks to her marriage and flash-forwards to a post-mission interrogation, is thoroughly engrossing, as are the top notes of resolve, fear and deterioration individually rendered by her co-stars.

Rodriguez in particular is a revelation, readily dispatching her sparkly-sweet “Jane the Virgin” persona to commandingly convey a hard-ass who cracks spectacularly in one terrifying scene. And though relegated to only a handful of scenes, Isaac dutifully haunts the picture.

For a movie that depends mightily on the subtle transformation of natural beauty into an atmosphere of picturesque dread (before going full-on hallucinogenic), kudos go to the interplay of the behind-the-scenes team: cinematographer Rob Hardy’s textured visuals, Mark Digby’s freaky-flora production design, Glenn Fremantle’s soundscape, and Andrew Whitehurst’s visual effects, which run the gamut from the chillingly hyperreal to the magnetically kaleidoscopic. Bringing it all together is Garland’s harmonious blending of the clinical and the otherworldly, without ever sacrificing the emotional life of his characters.

In other words, you may forget there’s a marriage at stake at the end of “Annihilation” when the ingredients list includes explosions, crystal trees and fire, but Garland hasn’t. He wisely ends his agreeably trippy nature-horror flick with something disconcertingly modest: characters in a room sizing each other up. Because when it comes to lurching into the unknown, and risking being changed, who needs the Shimmer when we’ve always had other people?