“Another Round” director Thomas Vinterberg teared up as he accepted his Oscar for Best International Feature, as he dedicated his win to his daughter, who was killed in a car accident days into shooting the film.

A driver distracted by his phone slammed into the car driven by Vinterberg’s ex-wife Maria, and while Maria managed to recover from the accident, Ida was killed. She was just 19.

“We wanted to make a film that celebrates life. Four days into shooting, the impossible happened. An accident on the highway took my daughter away. Someone looking into a cell phone. I miss her and I love her,” Vinterberg said, reflecting on the moment. “We ended up making this movie for her as a monument. Ida, this is a miracle that just happened, and you’re part of this miracle. Maybe you’ve been pulling some strings somewhere, but this one’s for you.” 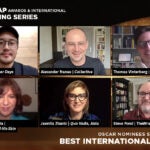 Vinterberg explained that Ida was in Africa when she first read the script for “Another Round” and was determined to be a part of it. The plan was that Vinterberg would film in his daughter’s high school and populate the supporting cast with some of her friends. But she never got to share in that excitement.

Vinterberg was nominated not just for Best International Feature this year but also Best Director. The added nomination came as such a surprise that his reaction to it went viral. Check it out here.

“Another Round” stars Mads Mikkelsen and is the story of a high school history teacher who along with his colleagues comes up with a hypothesis to go about their jobs while inebriated.