Once again guest-hosting “Jimmy Kimmel Live” on Wednesday, Anthony Anderson talked a bit about the riveting NBA finals victory by the Milwaukee Bucks the night before. And of course this led to a discussion of the team’s finals MVP Giannis Antetokounmpo, who scored an amazing 50 points during the winning game.

As Anderson said during his opening monologue, “Giannis Antetokounmpo is one of the biggest — and longest — names in the game, and even though we’ve seen his name all over TV for the past month, people still butcher it. Like I do.”

So Anderson decided to incentivize correct spelling of the champ’s name by offering random people money.

Now to be clear, the joke was not about Antetokounmpo’s name itself. At no point was *that* a punch line. The joke was at the expense of people who can’t seem to get it right. The way it worked was that a “Jimmy Kimmel Live” producer went out onto a Hollywood sidewalk and asked random people to spell the champ’s name. The first person was offered 5 bucks. When they failed, the next person was offered $10, and so on. And as the video showed, they kept doubling the amount until they made it to $1,280. 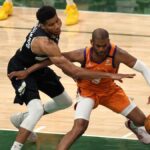 In fairness, a lot of the people they picked appeared to not be particularly big basketball fans. And almost everyone thought his name started with the letter Y, thanks to its proper Greek pronunciation. In the end, victory went to a pair of tween boys, one of whom happened to be wearing an Antetokounmpo jersey.

It’s amusing, and you can watch the whole monologue above.

For those who are curious, Antetokounmpo’s parents emigrated from Nigeria, and he was born in Greece. Unfortunately, because Greece doesn’t recognize birthright citizenship, he was essentially stateless until the country of his birth finally granted him citizenship in 2013, when he was 19 years old and just before he was drafted into the NBA. The spelling of his last name is the Greek transcription of his family’s last name, Adetokunbo. He received Nigerian citizenship in 2015.