Three years after his death, fans are about to get a closer look at the life of Anthony Bourdain. And in the first trailer for “Roadrunner: A Film About Anthony Bourdain,” there is a ton of unearthed footage, including from his early career.

Billed as “an intimate, behind-the-scenes look at how an anonymous chef became a world-renowned cultural icon,” the nearly 3-minute trailer indeed shows an amalgamation of footage from when Bourdain was just starting out, all the way up to his final years.

There’s footage of him in the first kitchens he worked in, as well as the time where he was writing his renowned book “Kitchen Confidential.” That said, it won’t just be about his career as a chef.

“It was almost never about food,” one of Bourdain’s friends says in a clip. “It was about Tony learning to be a better person.” 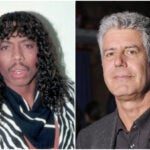 In that process, we see glimpses of some of Bourdain’s earliest travels. As he marvels to himself, “One minute I was standing next to a deep fryer, the next, I was watching the sunset over the Sahara.”

But for as much as the movie is set to dive into the exciting and unique adventures that Bourdain went on during his life and career, the trailer indicates that it will also reveal more about the darkness in the chef’s world that eventually led to him to take his own life.

Morgan Neville, director of “Won’t You Be My Neighbor” and “20 Feet From Stardom” directs the film, and produces it alongside Cait Rogers. “Roadrunner: A Film About Anthony Bourdain” is set to hit theaters on July 16

You can watch the full trailer here and above.