Anthony Boyle and Lovie Simone have joined the cast of AppleTV+’s upcoming limited series, “Manhunt,” which follows the hunt for John Wilkes Booth after he assassinated Abraham Lincoln, TheWrap confirms.

Boyle will star as Booth, while Simone will play Mary Simms, a former slave of the doctor who treated Booth’s injury and gave him safe harbor after his crime.

The pair join series lead Tobias Menzies, who will embody Lincoln’s War Secretary, Edwin Stanton, who was nearly driven to madness by a desire to catch the president’s killer.

The limited series is based on the book “Manhunt: The 12-Day Chase for Lincoln’s Killer” by James Swanson.

Part historical fiction, part conspiracy thriller, “Manhunt” will take audiences into the aftermath of the first American Presidential assassination and the fight to preserve and protect the ideals that were the foundation of Lincoln’s Reconstruction plans — issues that reverberate into the present day. The series strongly features Black historical figures whose lives intertwined with the escape, manhunt, and subsequent high-crimes investigation, including Mary Simms. 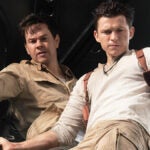 Monica Beletsky, known for “Fargo” and “Friday Night Lights,” will showrun and executive produce the true-crime series. “Manhunt” marks the first series order to hail from Beletsky’s overall deal with Apple TV+, which was recently renewed. Carl Franklin will serve as director and executive producer.

Boyle is also set to appear in the AppleTV+ World War II drama “Masters of the Air.” His other credits include HBO’s “The Plot Against America” and BBC’s “Ordeal by Innocence.”

Simone is best known for her role on the OWN series “Greenleaf.” She also recently appeared in the prequel series “Power Book III: Raising Kanan.” Simone will next appear in “The Walk.”