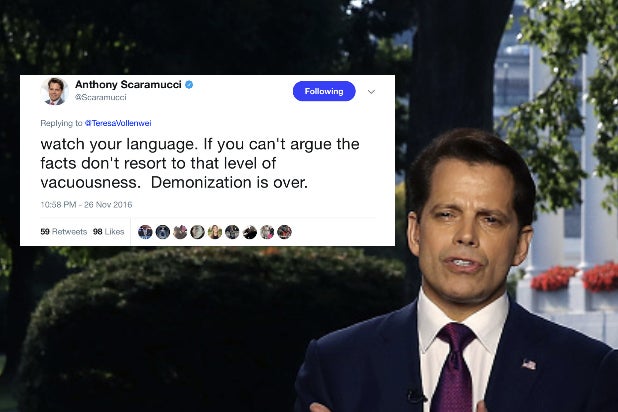 White House communications director Anthony Scaramucci, who is trending today because of an expletive-filled interview in which he accused Steve Bannon of “trying to suck [his] own c—,” has a history of berating people who curse on Twitter.

@Issaquahfunds I like the give and take as long as it is without the curse words, my kids are on this thing called Twitter!!

“I like the give and take as long as it is without the curse words, my kids are on this thing called Twitter!!” Scaramucci tweeted on March 6, 2014.

That prompted Twitter user @MisterPurple303 to tweet at Scaramucci Thursday: “Do your kids read the New Yorker?”

@owsar USA will fix its problems and prevail. Don't curse or I am going to block u,be rational will respect your views no matter how diff.

“Don’t curse or I am going to block u, be rational will respect your views no matter how diff,” Scaramucci wrote on Jan. 6, 2012, to a user named @owsaw whose account has since been suspended.

@SickLotTes you will now be blocked. The cursing isn't called for.

In November 2016, he chastised someone for using the word “crap.”

“Watch your language. If you can’t argue the facts don’t resort to that level of vacuousness. Demonization is over,” he wrote.

watch your language. If you can't argue the facts don't resort to that level of vacuousness. Demonization is over.

After Scaramucci became a meme Thursday for his foul language in an interview with the New Yorker’s Ryan Lizza, Scaramucci tweeted: “I sometimes use colorful language. I will refrain in this arena but not give up the passionate fight for @realDonaldTrump‘s agenda. #MAGA.”

In his interview, Scaramucci discussed his frustration with White House leakers and accused White House chief of staff Reince Priebus of leaking information about him.

Scaramucci called Priebus a “f—ing paranoid schizophrenic,” adding that he will be asked to resign shortly.

Scaramucci believed that Priebus was the one who told the New Yorker about a planned dinner with Trump, Fox News host Sean Hannity and former Fox News executive Bill Shine at the White House.

“‘Oh, Bill Shine is coming in. Let me leak the f–ing thing and see if I can c—block these people the way I c—blocked Scaramucci for six months,'” he said mimicking, Priebus.

How did Scaramucci go from blocking people who said “crap” to using the word “c—block” in an interview with a reporter?

Anyone who knows isn’t leaking.