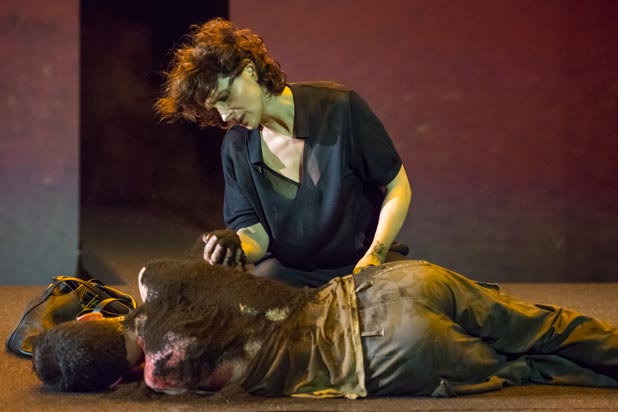 Ivo van Hove brings his stripped-down, damn-all-conventions approach to Sophocles, in this case “Antigone,” which opened Sunday at BAM’s Harvey Theater and stars Juliette Binoche. (It runs through Oct. 4.)

Fans of the Belgian director won’t be disappointed by this modern-dress production, first performed in February 2015 at Les Theatres de la Ville de Luxembourg, which turns the ruler Kreon (Patrick O’Kane) into a 21st-century fascist who brags, “First let me say/Our city is safe again.”

Kreon hails Antigone’s dead brother Eteokles and buries him with honors. He damns her other brother, Polyneikes, as a traitor in the civil war, and decrees that his body not be buried. Which leaves it to Antigone to play the world’s most famous gravedigger; she knows that death is forever and the laws of man only “begin today or yesterday.”

Van Hove’s productions aren’t always easy to watch, and this “Antigone,” set in some desert landscape, is no exception. There’s a huge bright disc of a sun nearly blinding the audience at the beginning of the drama and again at the end. The voices are all overamplified, and at times Binoche and O’Kane seem to be playing to a movie camera.

On film, Binoche exudes a moody spirituality. Here, she effortlessly takes the moral high ground, yet it’s often impossible to predict how she’ll defend that turf. This approach works fine for the first half of “Antigone,” especially when her sister, Ismene (Kirsty Bushell), refuses to help with the burial since, as a woman, she’s powerless. “Good excuse,” says Binoche’s Antigone. “Well I’m off/A brother needs burying.” The point is made, although Anne Carson’s new translation often overworks the contempo slang.

Later, after her “crime” has been exposed, Antigone isn’t so sure of her actions. She faces her self-imposed isolation only to find that she’s “not at home with the dead nor with the living.” Binoche, so good at playing melancholy, takes a full-throttle approach to her suicide that isn’t supported vocally, even with all the amplification.

O’Kane has no need for the mics. The production’s high point isn’t any of Kreon’s scenes with Antigone but with his son and Antigone’s fiance, who, as played by Samuel Edward-Cook, makes Haimon more than a match for his father. He’s clever, while Kleon is merely powerful.

As with Binoche and O’Kane, Edward-Cook begins his performance almost in a whisper. “I trust your judgment….No marriage could outweigh this,” he says of Antigone’s disobedience.

But in a brilliant arc of subterfuge, he is soon telling his father that he’s acting like a “boy dictator,” and Kreon immediately sets in motion not one or two but no fewer than three suicides. O’Kane’s performance doesn’t let us doubt for a moment that his Kreon is capable of that and much more destruction.