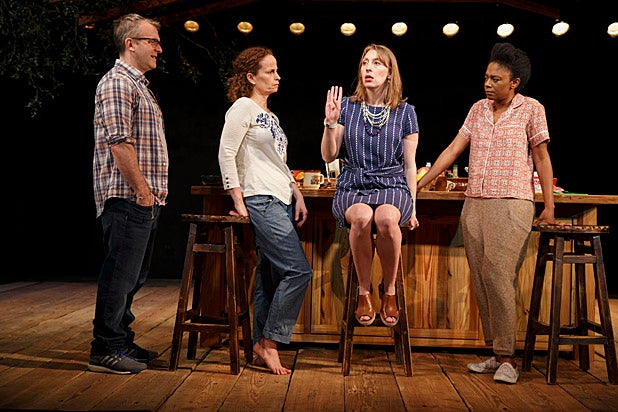 Beware of plays with coy, obscure titles that are clumsily explained shortly before the final curtain.

The mysteriously romantic Adrian (Rob Campbell) points to the little-known Antlia Pneumatica, a constellation resembling an air pump. At least he thinks it resembles an air pump. Nina (the always engaging Annie Parisse) isn’t so sure, mainly because she can’t find the stars he’s talking about.

Adrian goes on to find other stars, which if connected, spell out her name. Adrian does refer to the 18th-century astronomer Nicolas Louis de La Caille, but makes no reference to the 20th-century illustrator Al Hirschfeld, who always included his daughter’s name, Nina, in his theater drawings for the New York Times. As titles go, “Antlia Pneumatica” is only marginally better than “Al Hirschfeld.”

Does the Antlia Pneumatica exist? Or is it a figment of Adrian and de La Caille’s imagination? And can the same be said for all those newly discovered Nina constellations?

Washburn asks many such questions in her play, and her characters answer almost all of them for us. What is the nature of time, imagination, reality, binge-eating, you name it.

Nina, Adrian, and a few others have gathered at her family’s country house to hold a funeral for a recently deceased friend. The story resembles Lawrence Kasdan‘s “The Big Chill” — and, before it, John Sayles‘s “Return of the Secaucus 7.” One by one, friends gather despite the fact that few of them have remained in touch with each other. Adrian, especially, knows nothing of anybody’s children, mates, careers, etc.

Washburn captures the awkward humor of people trying to play catch up with their collective past. She and her director, Ken Rus Schmoll, are effective when scenes feature the witty banter between Nina and the other female characters, played by Maria Striar, April Matthis, and Crystal Finn, who brings much needed energy in the play’s final scene.

The male characters are much less successfully drawn. Here, Washburn establishes two polar opposites. Adrian is the long-lost stud; Nina and he obviously had an affair way back when. Then there’s Len. As written by Washburn and played by Nat DeWolf, he can best be described as asexual. The contrast between the two men, however, is not illuminating. It’s artificial and forced.

In the Playbill, Washburn writes about the difference between seeing a play and listening to a play. A not insubstantial amount of “Artlia Pneumatica” unfolds like a radio play with voices amplified and/or taped as the audience sits looking at a bare stage for minutes at a time.

A deep question not asked by Washburn in her play: How would Hirschfeld have illustrated “Antlia Pneumatica” for the Times?