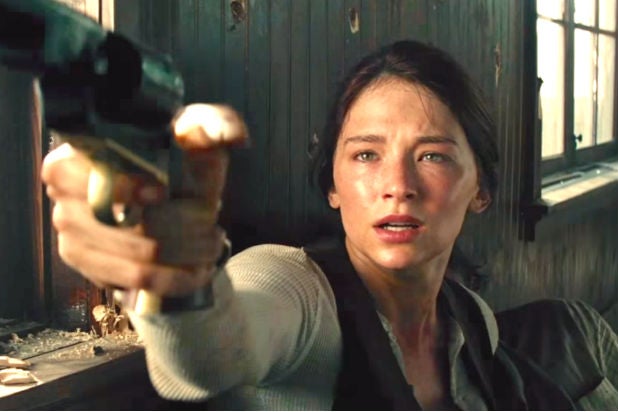 Haley Bennett is the only female star of Antoine Fuqua‘s much-anticipated “Magnificent Seven” remake — but the director said he could easily make a female version of the Western, and a historically accurate one, at that.

“You can make ‘Magnificent Seven’ with all women,” Fuqua told reporters at a press conference opening the Toronto International Film Festival on Thursday.

In their research, Fuqua and star Denzel Washington read several books about the gritty lives of women on the frontier — represented in the film by Bennett, who stars alongside Chris Pratt and Peter Sarsgaard.

“They had to fight animals, they had problems with Native Americans and that culture crash. They’re tough,” the director said.

Gender wasn’t the only hot topic Thursday — Fuqua was asked about his multiracial cast, especially given the time period in which the film is set.

“I just wanted to see Denzel on a horse, I didn’t think about color,” Fuqua joked.

He said that conversations between himself, Sony and release partner MGM centered purely around choosing quality actors.

“A handsomely made if lackluster riff on John Sturges’ epic about desperados hired to save threatened villagers, it won’t challenge the original’s supremacy as a big-cast entertainment with a wry, redemptive sense of humor,” TheWrap’s Robert Abele wrote in his review.

IndieWire saw the film as a positive portrait of diverse characters working together to defeat a greedy enemy (and, yes, they made a Trump analogy).

“The shoot-outs — while infrequent — are enormous and staged with a more coherent sense of geography and progression than Fuqua has ever mustered before. For a movie that could have been a cheap photocopy of something that has already been done to death, this early fall surprise rides into multiplexes with the fresh of a new season,” the review said.