And on Thursday night, Lips shared his latest premonition with the near-capacity crowd following TheWrap’s screening of the verite documentary “Anvil! The Story of Anvil.”

“Earlier today, I had a vision that we’d be standing on a table at an awards show…” he said, before being cut off by director Sacha Gervasi, whose gentle interruption suggested the affable metal rocker was about to reveal something prematurely.

Well, bank on a tabletop “Anvil!” cameo this awards season. If Lips wasn’t so skilled in the dark arts of guitar, he’d make a great visualization coach.

More than 30 years passed between the forging of Anvil, and the Critics Choice- and Independent Spirit-nominated documentary that catalyzed the realization of its dream: to rock. As “Anvil! The Story of Anvil” clearly demonstrates, it was Lips’ dedication to his dream – and absolute, unwavering faith in it – that got them where they are today. 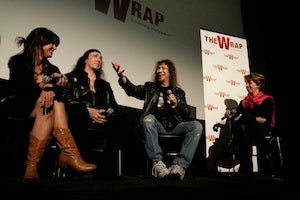 Asked by an audience member how their lives have changed since the film catapulted Anvil back into the spotlight, drummer Robb Reiner said: “It’s been a 180-degree turnaround. We have a real manager, a real agent, real distribution. We played with AC/DC last year in front of 55,000 people at Giants Stadium.”

He took a beat, then added: “And we quit our day jobs.”

Those lowly day jobs filled the weeks, months and years between Anvil’s dwindling touring schedule over the past three decades; the bulk of their lives were spent in near-poverty in Toronto, despite the fact that they are widely revered among their more famous peers as founding fathers of modern metal rock.

But toiling in obscurity never dimmed their hope that someday they’d get theirs.

The film is a story of that hope, and the friendship between Lips and Reiner that was essential to its sustenance. Throughout the film, Lips is consistently defiant in the face of one failure after another; his childlike belief that a payoff is coming gives a sweetness to a situation that looks more dire with each post-50th birthday.

What’s more, the members of Anvil had passed on invitations throughout the years to join more successful acts. Instead, they chose the material discomforts of sticking together.

“There’s nowhere to really run, because once you obtain an ID as Anvil, everywhere you go, you’re still from that band,” Lips said. “We were still doing music full-time, in the essence that we were still recording and playing. We put out as many records as the big bands do. … It doesn’t matter if you sell 5 million or 5,000; the same amount of work goes into it." 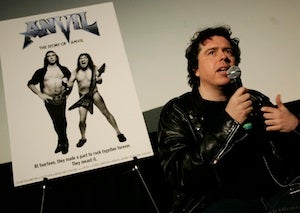 Gervasi (pictured, right), a friend of the band since he was a teen fan, contacted them out of the blue through their website (“the worst website in the world; it’s hard to believe it’s even real,” Gervasi said) long after making his own way as a journalist and screenwriter (“The Terminal,” “The Big Tease”).

“I wasn’t out to make a film,” Gervasi said. “I just wanted to hang out with them again.”

For Anvil’s part, Lips had long written off the British kid and sometimes roadie, whom he’d last seen in 1986.

“I wrote him back,” Lips said, “saying, ‘I thought you died or became a lawyer!’”

Their reunion quickly became an inspiration for Gervasi, who couldn’t believe that after all those years, Anvil was still plugging away.

Lips recounts the moment Gervasi told him about his idea for the film as the beginning of another vision: “I actually could see it finished, and I could see the results,” he said. “And I got extraordinarily emotional, because I could see it coming – I could see myself sitting here, right now – everything down to excruciating detail.”

Gervasi got swept up in it himself.

“It was the lack of bitterness about the success of all those bands who were influenced by Anvil,” he said, “that was incredibly energizing for me.”

Not energized: Any of the studio executives who saw the film. Never mind the overwhelming critical acclaim the film has received since – it just wouldn’t sell. So they did it the rock ‘n’ roll way: passing copies around, showing the film in pubs, entering it at bottom-feeder film festivals, hoping someone would see it and make a move.

One such festival took place in the basement of a pub in Prague, where “two VH1 guys on holiday,” as Gervasi described them, happened in on a lark and were stricken with the heartbreaking – and ultimately uplifting – story of friendship and hope.

Score another vision realilzed for Lips. 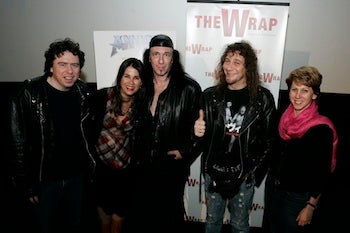 It’s one thing to hear that kind of platitude from a Disney character. It’s quite another to hear it from a weatherbeaten, leatherbound 50-something with long, wild hair whose music sounds like a symphony of construction sites.