Alexandria Ocasio-Cortez dug into her well of pop-culture references Thursday to extend her beef with fellow Congresswoman Marjorie Taylor Greene after the Georgia Republican was called out for another slip of the tongue.

During debate Wednesday for the House’s vote on the “Protecting Our Kids Act” gun reform package — which later passed — Greene flagrantly gaffed on the chamber floor, referencing “due-process rights that are being so fragrantly and horrifically violated.”

Ocasio-Cortez did not let the opportunity pass her by, alluding to an epic Robert Duvall line from 1979’s “Apocalpse Now,” which you can watch here or in the video at the top of this post.

This is not the first time the two Representatives have gone at each other on Twitter, including just last year, when Greene challenged AOC to a “Green New Deal” debate. 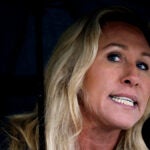 The passage of the gun-reform bill, which isn’t expected to make it through the Senate, came two weeks after 19 children and two teachers were gunned down in a Uvalde, Texas, elementary school by a gunman armed with an AR-15 assault rifle. On Tuesday, actor Matthew McConaughey’s also visited the White House, calling for “responsible gun ownership” in an emotional speech during the press briefing.