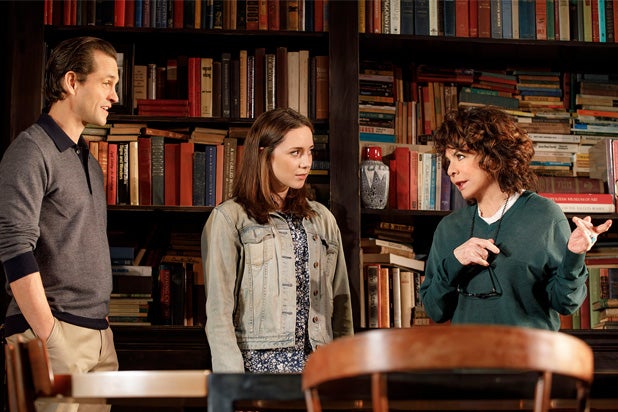 From Pablo Picasso to Joan Crawford, great artists haven’t always made the best parents. But who doesn’t wish you had a mother who lived in Florence, worshipped Giotto and wrote books on art history that made her famous?

That last part about art-history books making anyone famous is a bit eye-rolling. Regardless, it’s nice to see that intellectuals are being taken seriously again, even if it’s only in Alexi Kaye Campbell’s new play, “Apologia,” which had its New York premiere Monday at the Roundabout’s Laura Pels Theatre.

All the more eye-rolling is the fact that Campbell’s play is not set in 1949 but 2009 so that the playwright can make a cheap Trump joke without mentioning the president’s name.

The mother in “Apologia” is named Kristin Miller (Stockard Channing), and she’s so famous that there’s “one of those island things in Barnes and Noble on Fifth Avenue dedicated to [her] memoir.”

Kristin calls her latest book “a memoir” despite the fact that neither of her two sons is mentioned in it. This omission awakens horrible memories of childhood abandonment for her banker son, Peter (Hugh Dancy), and her mentally challenged slacker son, Simon (also Dancy).

Both men have some questions to ask Mom. And so do their respective girlfriends, Claire (the very glamorous Megalyn Echikunwoke), a TV actress, and Trudi (the very eager Talene Monahon), who is an upbeat American Christian.

In addition to her considerable art-history credentials, Kristin is a leftist atheist who keeps a portrait of Karl Marx over her downstairs toilet.

Perhaps she wasn’t a great mother, or even a very adequate one, but there’s no doubt that Kristin Miller is the only character worth watching in “Apologia.” Campbell, Channing and director Daniel Aukin do an expert job of distracting us from this fact, and it’s exhilarating to watch Kristin call out her dinner guests’ sophomoric cant regarding Jesus (Trudi), money (Peter) and art and fashion (Claire).

Channing plays this no-nonsense provocateur to perfection, and Campbell gives her a quiver full of poison arrows to skewer the second-rate (Peter) and third-rate thinkers (Trudi and Claire) around her. Kristin takes no prisoners. Even the overuse of a certain word, like “hilarious,” can propel her to prowl the stage, setting up her attack, and then go in for an especially bloody kill.

In one respect, the two vapid girlfriends make dramatic sense. Kristin’s sons have each chosen a woman who’s clearly the polar opposite of their mother. But only Channing’s Kristin really holds our attention.

One character in act one does escape her stiletto tongue, and that’s an old gay friend. Hugh (the very amusing John Tillinger) often joined with Kristin in student protests back in the late 1960s, but in 2009 he’s reduced simply to providing comic relief and dropping homosexual bon-mots when a dinner party turns into a family showdown.

Simon makes a delayed entrance, at the very end of act one. He holds the big secret that is supposed to make us question Kristin’s maternal instincts, in the play’s weak second act. This mother-son encounter is written in staccato dialogue that sounds like early David Mamet and comes off just as forced. It’s also punctuated with one big outburst from Simon that mirrors his brother’s explosion earlier in the play. Dancy is restrained in both roles, but radically overdoes these twin meltdowns.

The greater problem, however, is Campbell’s awkward shifting of gears on the subject of Kristin, which recalls the structural problem in “The Prime of Miss Jean Brodie.” The title character there, too, is the sole source of attraction. When we learn she supports Franco, it gives fascism a good name. Kristin gives bad mommies a good name.

Also Read: 'What the Constitution Means to Me' Theater Review: A Timely Blend of the Political and Personal

Campbell attempts to redeem her, but makes the mistake of using the dull Trudi to explore and then justify this mother’s choices. The play’s ending is icky (there’s no better word) with its pious talk of “pioneers” and “map-makers.” Trudi doesn’t deserve to mow Kristin’s lawn, much less be her guest for one night.