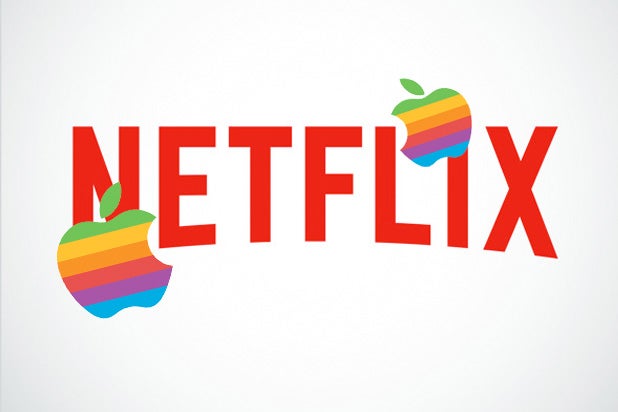 Apple plans to spend $1 billion on content to develop up to 10 big-budget shows over the next year, music to the ears of creatives in and out of the 30-mile zone who now have another deep-pocketed buyer to pitch to.

It’s a move that could position the computing giant to launch its own subscription streaming service that could challenge Netflix and Amazon — and newer old-media streaming players like CBS and Disney. But for now, the company’s move is really about selling more iPhones and Apple TVs.

Apple’s hope is to turn iTunes into an indispensable source of must-see TV, like Netflix or HBO, which would then incentivize customers to buy its products and sign up for subscription products down the line. Netflix uses “House of Cards” and “Stranger Things” to get more than 100 million people worldwide to shell out $10 a month. And while a pipeline of original programming should help Apple develop more ancillary iTunes revenue down the line, for now, Apple can use their exclusive content to ship $200 Apple TVs and $600 iPhones.

It’s not hard to imagine the sales pitch for the only brand of television that could theoretically show a series with the popularity of a “Game of Thrones.”

“First and foremost, they’ll use it to sell more products,” Ezra Kucharz, a media adviser and former senior strategist to  CBS CEO Leslie Moonves, told TheWrap, while noting that he hadn’t spoken to anyone at Apple about its just-announced push into original content.

“You’ll probably get two different strategies in the iTunes Store,” Kucharz said. “There will be a ‘skinny bundle’ and subscription service of sorts where this content will live. There may be multiple channels. But if you want to buy individual episodes, you will be able to.”

Ross Gerber, the president and CEO of Gerber Kawasaki Wealth and Investment Management, said a premium subscription service — maybe a revamped Apple Music — has to be the plan.

But he questioned why Apple is developing original content instead of using the $77 billion in cash and short-term investments on its balance sheet to acquire or pursue a joint venture with a producer of high-end TV and movies, perhaps even Lionsgate. Apple could then use its rights to those shows and movies to launch its own Netflix-like streaming service, without having to build it from the ground up in a company with a very limited track record in that field.

Apple’s initial forays into original content, the reality series “Planet of the Apps” and “Carpool Karaoke,” didn’t really do much to indicate what its eventual programming plans might be — and weren’t exactly critical darlings, either.

“The first two shows are horrible,” Gerber said. “Then I watch ‘The Defiant Ones’ on HBO, which is basically a big Apple ad. How in God’s name did Apple not make this?”

But that could be changing.  In June, Apple content chief Eddy Cue brought over Sony Pictures Television Presidents Jamie Erlicht and Zack Van Amburg to run its video business, tipping its hand that it would be getting into scripted content. Kucharz said other than live sports, that’s the only content of real value anymore.

“It’s going to be all about scripted shows,” he said. “If you’re in the commoditized and perishable content business, things are going to be tough. You can get the weather a lot of places.”

And while $1 billion is an eye-popping number, it’s a relative pittance to Apple, about half of what Time Warner’s HBO spends on content, and one-sixth of Netflix’ content budget. It could be a sensible bet for Apple that could make it a significant player in original video, while also bolstering sales for the iPhone and iPad (despite their higher price point than other smartphones and tablets). Gerber, however, questioned whether that commitment was big enough to make a real impact in Hollywood, especially with Apple’s prodigious bankroll.

“They’re going to make 10 to 15 shows,” he said. “That gives you a very low likelihood of success in Hollywood. What Netflix does is they spend so much money they’re going to have good shows, because everyone wants to work at Netflix. The bad shows just get swept under the rug.”

Another motivation for Apple to beef up its lean slate of original content: decreasing market share in digital video. In 2012, the company hauled in about 50 percent of all digital video downloads. But with competitors like Netflix, Amazon and Hulu gaining steam in recent years, Apple has seen its slice of the pie cut to between 20 to 35 percent, according to the Wall Street Journal.

This drop has been masked by the overall size of the digital video market rapidly growing over that time period. Even though Apple has a smaller share, it’s still seen its revenue from services (which includes iTunes downloads) take off, jumping 22 percent year-over-year to $7.3 billion in its most recent quarterly report.

If it can pump some of its cash into intriguing content like its own “House of Cards,” Apple can regain some share in a growing market. And it can also add value to Apple TV, which is facing increased competition from Smart TVs and other streaming devices like Amazon’s Fire TV and the Roku Premiere.

“You will see them develop series within iTunes and the Apple TV ecosystem,” Kucharz said. “They tried a couple times to kind of revamp Apple TV and do deals with some of the networks. Ultimately, this may be another way.”

Apple thrives on its ecosystem — the often seamless interconnection between its myriad devices. To fully realize all of the iPhone’s features, for example, it’s better to pair it with a Mac than a PC. And Apple has made it possible for iPhone users to text from a MacBook and make phone calls from an iPad — and recently, bounce between devices when renting videos through iTunes. Adding a substantial suite of high-end original content would be a further draw to an already compelling package, similar to Amazon making originals like “Transparent” available to its Prime subscribers.

That could become another funnel back to Apple’s ecosystem, keeping current users engaged and attracting new ones — assuming Cue, Erlicht and Van Amburg can develop compelling enough content.

Gerber, however, thinks real subscription revenue needs to arrive sooner than later, and wondered why a company that clearly wants to get in showbiz wouldn’t just buy its way to a bigger stage.

“I have a lot of Apple stock,” he said. “What will Apple be in five years? If it’s going to be a phone company, they’re dead. It’s got to be another company. AT&T, the smartest move they could have done was buy Time Warner. How many [companies] need to buy [other companies] until Apple buys someone?”