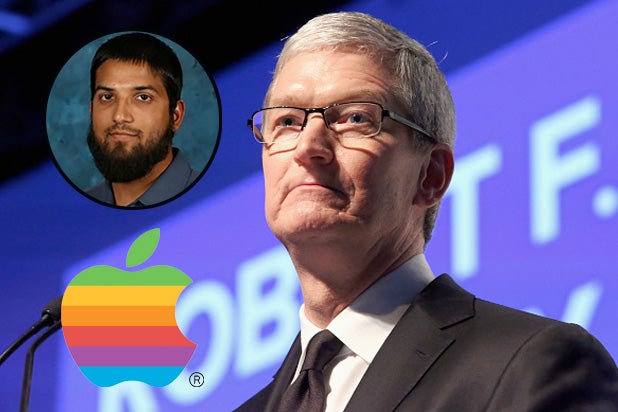 It began Wednesday, when Cook threw a long-simmering standoff between technology companies and law enforcement into the spotlight with a defiant letter stating Apple would defy a court order that it help unlock an iPhone used by Syed Farook. The U.S. citizen of Pakistani descent, along with wife Tashfeen Malik, killed 14 people in December during a mass shooting in San Bernardino, California.

The FBI wants to peek into the device’s data for clues to future attacks, but says it needs Apple’s help to get around security features designed to protect all iPhones from being hacked. A court agreed, ordering Apple to comply.

In his letter late Tuesday, Cook explained that doing so could create a dangerous backdoor into the personal digital data of consumers at large, turning that solitary phone passcode into a matter concerning everyone who uses a mobile to device.

This isn’t the first time a device maker has been ordered to decode its own product. But because of Apple’s global power and the magnitude of the San Bernardino attack, the company has become an adversary in the showdown that will set the precedent for all such future conflicts.

Here’s how events have spiraled since Cook’s letter:

In a show of support, other consumer technology companies — starting with Google on Wednesday — praised Cook for drawing attention to the importance of protecting data encryption.

Google, as operator of the Android software that powers the majority of the world’s smartphones, was one of the earliest and most meaningful allies to weigh in, with CEO Sundar Pichai saying Wednesday that the Justice Department and FBI’s request could require companies to enable hacking of customer devices and data, “a troubling precedent.”

Since then, Twitter’s CEO has tweeted a brief statement of support for Cook, and Facebook reiterated its standing policy to assist lawful requests from law enforcement while also fighting requirements to weaken companies’ security systems. Later, CEO Mark Zuckerberg said at a trade conference in Barcelona that the company was “sympathetic” to Apple. “We believe in encryption,” he said.

Apple vs. FBI bubbles into a campaign issue

Republican presidential frontrunner Donald Trump was first to turn the Apple debate into fodder for the 2016 election.

He sided with law enforcement, calling for vigilance on security and “ sense” during an appearance on “Fox and Friends” Wednesday. He rejected Apple’s argument that creating the tool to unlock the shooter’s phone could jeopardize private citizens’ rights.

“Apple, this is one case, this is a case that certainly we should be able to get into the phone,” he said. “And we should find out what happened, why it happened, and maybe there’s other people involved and we have to do that.”

The Department of Justice, which is pursuing the case against Apple on the FBI’s behalf, called the company’s public position on the case a “marketing strategy,” according to a report in the New York Times.

Apple’s desicion “appears to be based on its concern for its business model and public brand marketing strategy,” prosecutors said in a court filing on Friday, as the Justice Department also demanded that a judge immediately order Apple to provide the tools required to unlock the phone.

The Republican candidate ratcheted up his offensive on Apple on Friday, telling followers to boycott the company until it helps the FBI unlock the San Bernardino phone.

“What I think you ought to do is boycott Apple until such time as they give that security number,” he said, speaking at a rally in South Carolina. “[Apple CEO] Tim Cook is looking to do a big number, probably to show how liberal he is.”

Two congressional committees kicked off the advanced planning for hearings over Apple’s refusal to help the FBI unlock the phone.

The House Energy and Commerce Committee released a public statement on Friday saying it had requested Cook and FBI Director James Comey testify. The House Judiciary Committee asked officials from Apple to testify at a hearing on Mar. 1, according to a Bloomberg report.

Also Read: Trump and Obama Agree on One Thing: Unlocking a Killer's iPhone

After reports seized on a Friday court filing in which the FBI indicated San Bernardino County officials changed the passcode on Farook’s phone soon after the attack, the FBI issued a statement on Saturday admitting that its own investigators had cooperated with the county, which is the owner of the iCloud account linked to the phone.

The officials reset the passcode on that remote account in order to “exploit crucial data” contained there, it said, but the FBI downplayed the relevance of that reset on the current case with Apple. “The reset of the iCloud account password does not impact Apple’s ability to assist with the court order,” it said.

FBI Director fires back with letter of his own

Director of the FBI James Comey said the agency must fight to hack the passcode in a wide-ranging letter published late Sunday, also calling on the American people to pause and examine what’s really at stake in the case.

Comey disputed that the FBI’s investigation could endanger wider consumer privacy, writing that the agency doesn’t want to “set a master key loose on the land” but rather wants to “try to guess the terrorist’s passcode without the phone essentially self-destructing and without it taking a decade to guess correctly.” Without calling out Apple by name, he discouraged the public from letting “corporations that sell stuff for a living” or those with “the loudest voices” command the issue.

Apple angles to take battle out of the courts

In another message to customers and an internal memo to employees on Monday, Cook said the Justice Department should drop its case and instead should resolve the bigger issues of security versus privacy at hand in consultation with lawmakers and a variety of experts.

“We feel the best way forward would be for the government to withdraw its demands … and, as some in Congress have proposed, form a commission or other panel of experts on intelligence, technology and civil liberties to discuss the implications for law enforcement, national security, privacy and personal freedoms,” he said in both documents.

The Justice Department has stronger public support for unlocking the shooter’s phone than Apple does in its resistance, a Pew Research Center survey found Monday. It reported 51 percent of people surveyed said Apple should assist the FBI investigation, while only 38 percent sided with Apple’s opposition. The remaining 11 percent chose not to answer either way.