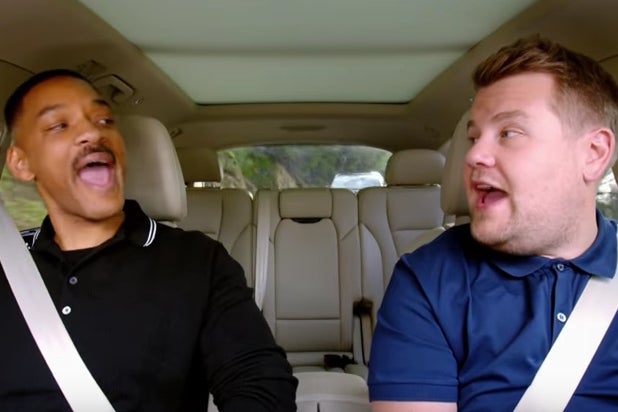 While streaming powerhouses like Netflix make their bones on gritty shows like “Narcos” and “House of Cards,” Apple is aiming for a more family-friendly approach as it jumps into original content, according to a new report by Bloomberg.

The tech juggernaut held up its August release of “Carpool Karaoke” — a spinoff of James Corden’s popular segment driving around and singing with celebs — to scrub “foul language and references to vaginal hygiene,” Bloomberg wrote.

And Apple is also axing any “nudity, raw language, and violence” from original programming debuting on its Apple Store, according to producers and potential content partners that spoke with Bloomberg.

The brand-obsessed company is seeking comedies and dramas with “broad appeal” — think NBC’s “This Is Us” more than Netflix’s “Ozark” or HBO’s “Game of Thrones.”

These constraints are part of Apple’s game plan to push its shows internationally as well, but have made the budding video wing appear “conservative and prickly” to producers pitching new shows to the deep-pocketed new player in the content world, according to Bloomberg.

Former Sony execs Jamie Erlicht and Zack Van Amburg joined the company earlier this year to lead its push into original shows, with about $1 billion ready to be spent in the year ahead. For reference, that’s about half of what HBO is spending in 2017, and pales in comparison to the $7 billion Netflix has earmarked for next year. Still, with more than $250 billion sitting around in cash, Apple has the ammo necessary to reinforce its content push if it’s going well.

“We’re out to be creative, move culture and do something Apple is adding value to,” said SVP Eddie Cue at the Code Conference back in February.

But the company’s aversion to “edgier fare,” as Bloomberg puts it, could stymie its plans to carve out its slice of the industry. Apple’s version of “Carpool Karaoke” has failed to gain much traction with audiences despite star power like Will Smith on its debut episod .

“Planet of the Apps,” the company’s first push into original content in June, struggled to catch on as well; the “Shark Tank” for apps show was met with a collective “meh” from viewers, even with judges Gwyneth Paltrow, Jessica Alba, and Will.I.Am brought into the fold.

Also Read: How 'Dirty John' Blitzed to the Top of the Apple Podcast Charts

Wall Street has been watching Apple’s Hollywood maneuvers as well. Drexel Hamilton analyst Brian White recently told TheWrap the company needs to “keep it interesting” if it wants to make a splash in the content game.

“I think if they do that — find that ‘House of Cards,’ find that ‘Breaking Bad,’ — they need something like that that’s so unique and different, and, in a way, almost a little shocking,” said White.  “That would grab the attention of an audience. ‘Mr. Robot’ is another one. Those kind of shows that are so unique it can really grab the attention of a mass audience, not just someone interested in music or apps.”

As Apple continues to roll out its shows heading into 2018, it’ll be hard-pressed to strike the delicate balance of interesting yet censored content it appears to be targeting.