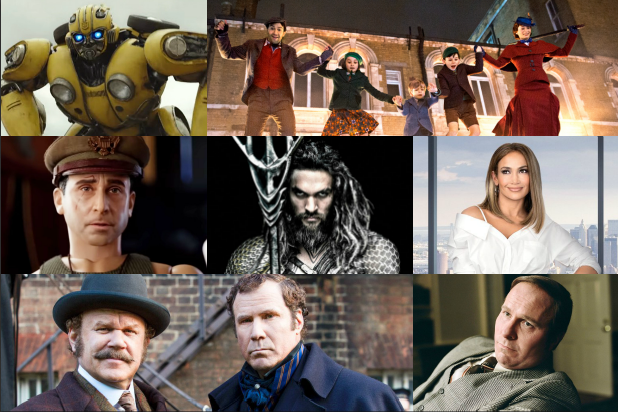 This weekend, the box office total for 2018 is expected to beat the all-time record set in 2016 with $11.3 billion, and it will do so with an overwhelming flurry of films on both the wide and limited release fronts.

Between this Wednesday and Christmas Day, seven films will open wide in movie theaters, five major specialty titles will get a limited release, and four more specialty films already in theaters will expand. Instead of “Star Wars” driving the overwhelming majority of box office business as has been the case for the past three years, a menagerie of movies will try to combine to replicate the impact that “The Force Awakens,” “Rogue One,” and “The Last Jedi” have had on the end-of-year charts.

And of the seven wide releases, three are expected to take center stage, starting with:

The past two holiday seasons have yielded two hit musicals: “La La Land” and “The Greatest Showman.” This year’s musical is Disney’s Xmas entry, a sequel to the studio’s legendary 1964 toe-tapper “Mary Poppins,” starring Emily Blunt in the title role originated by Julie Andrews, and “Hamilton” creator Lin-Manuel Miranda as the successor to Dick Van Dyke.

For family audiences, “Poppins” will face some stiff competition. Parents who saw the original film growing up will certainly be interested, but films like “Bumblebee,” “Aquaman,” and the already-released “Spider-Man: Into the Spider-Verse” will be bigger draws with kids. The key to legging out will likely be bringing in hardcore musical movie fans, usually female and older audiences who see films later in their run after word of mouth builds.

“Mary Poppins Returns” hits theaters this Wednesday and has a 76 percent score on Rotten Tomatoes. Independent projections are wide-ranging for most of this weekend’s releases, but “Returns” is tracking for a five-day opening in the $60 million range, while Disney’s projections are far more conservative at around $35 million.

Critical reception for James Wan’s superhero film isn’t as strong as “Wonder Woman,” but it still has been generally positive with a 70 percent RT score, far better than the tepid 40 percent given to the disappointing “Justice League,” which ultimately grossed an underwhelming (for an expensive franchise flagship film) $657.9 million worldwide.

That should be enough for DC fans looking for a fun time, and enough for “Aquaman” to get the DC Universe moving back in the right direction. Starring Jason Momoa in the title role, Warner Bros.’ blockbuster is expected to top the charts this weekend with a $65 million-plus three-day opening, with totals through Christmas Day being projected as high as $115 million.

Already, the film has been a big hit in 43 markets overseas, grossing $261 million worldwide and $189 million in China. That gives “Aquaman” a pace that’s 65 percent ahead of what “Justice League” demonstrated last year.

There is no Xmas film more critical to the future success of its studio than Paramount’s “Transformers” spinoff. After “The Last Knight” continued the once chart-topping franchise’s box office decline, Paramount decided to shake up the franchise, putting Laika animation director Travis Knight in charge of a prequel that would show how one of the most popular Autobots ended up on Earth.

And so far, the word-of-mouth has been exceptional. Film critics, who have widely panned every “Transformers” film that has come out this decade,” have given “Bumblebee” the highest Rotten Tomatoes score of any Christmas weekend release with 96 percent.

If “Bumblebee” succeeds, Paramount may have found a new formula to give their top tentpole franchise new life. The question is whether enough moviegoers are still interested enough in “Transformers” to give this film a chance, or if families and fanboys will continue to splinter off to “Aquaman” and “Spider-Verse” even into January. Right now, trackers have the film posting a three-day opening of $35-40 million, as the film tries to improve on the $130 million domestic total of “The Last Knight.”

And all the rest

Along with these three blockbusters, two more films will be released wide this weekend while another two will arrive on Christmas Day. STX will send in the Jennifer Lopez comedy “Second Act,” while Universal will release Robert Zemeckis’ “Welcome to Marwen.” Both films are projected to open to around $8-10 million.

Christmas Day will see Sony release the Will Ferrell/John C. Reilly film “Holmes & Watson,” while Annapurna will release “Vice,” which leads this year’s Golden Globes with six nominations but which has polarized critics with a 66 percent Rotten Tomatoes score.