Nobody saw “Stranger Things” coming when it first debuted on Netflix, and it’s now arguably the streaming service’s most iconic franchise. Ever since, Netflix has done a swell job of creating new hits from a wide variety of genres, from the fantasy of “The Witcher” to the wish-fulfillment of “Emily in Paris,” but a new mystery horror series called “Archive 81” has the potential to be the next obsessive hit that comes (seemingly) out of nowhere.

The new show, which is streaming on Netflix as of Jan. 14, is based on a podcast of the same name and plays out in two timelines: in present day, a young man named Dan (Mamoudou Athie) is paid an unimaginable sum by a mysterious organization to restore and digitize some video tapes that had been damaged in a fire. The tapes reveal the second timeline: the story of Melody Pendras (Dina Shihabi) plays out in the year 1995, as she seeks to put together an oral history of the residents of a mysterious New York City apartment building called The Visser. But as Melody’s story is revealed via said tapes, spooky goings-on begin occurring in the past and present that have a resonant and emotional impact on both Dan and Melody, and the deeper they dig the more complex the mythological web becomes.

The eight-episode first season is packed with the kinds of twists, mysteries and compelling characters that turned shows like “Lost” and recently “Yellowjackets” into obsessive hits. And while the first season of “Archive 81” packs plenty of answers into its first season (there’s even a full flashback origin story episode), there’s a lot left on the table for viewers to theorize about until a potential second season comes around. 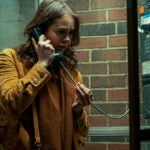 Fans of the podcast will find much to love as well, although showrunner and executive producer Rebecca Sonnenshine (whose credits include “The Boys” and “The Vampire Diaries”) told TheWrap in a recent interview that the podcast served as a jumping off point rather than a blueprint. “It’s very different from the podcast in many ways,” Sonnenshine acknowledged. “But it also hopefully very much captures the spirit of it and follows a general same kind of story. But the thing that we wanted to do was really establish these two characters, Dan and Melody, as characters that had a drive and a quest that they were on that would parallel each other, and that’s sort of where we started.”

Grounding Dan and Melody in emotional backstories (for Dan it’s his late father and for Melody it’s the mother she never met) served “Archive 81” twofold. “We wanted to make all the spookiness that we would encounter grounded in an emotional place so that our audience would really feel for them and want to go on this journey for them,” Sonnenshine said, while adding that the emotional crux of Dan and Melody’s stories also addresses a well-worn horror trope. “One thing horror stories have is this thing where you’re like, ‘Why don’t they just leave? Why don’t they just turn around?’ So we wanted to establish something that was so important to them that they really would risk things to keep going and that we would go along for that ride with them.”

As for the found footage aspect of the series, while the show plays around with various different media formats (each episode begins with a different type of video from the past), Melody’s storyline is thankfully not told entirely via found footage. Nor was that ever in the cards. “For me, I don’t necessarily want to watch the found footage,” Sonnenshine said before noting that she used to carry around an 8mm camera everywhere she went. “I do have an archive of tapes of my own. So that was kind of the inspiring thing. But conceptually, the thing that’s interesting about having an archive just as person is that you see it, and then you remember what the stories were like in your mind and you’re not seeing it in videos.” Indeed, as Dan is restoring the tapes they serve as a bridge into Melody’s story. “At all times you have to be thinking about what is captured on the footage — even though we’re not seeing it — and what is not, and making sure that anything that Dan needs to know we’ll see Melody shooting it.”

Sonnenshine knew where the season would end before she wrote the pilot (“I think you kind of have to know what your endgame is,” she said), but also revealed that she and the writing team fleshed out plenty of story that didn’t make the cut this season.

With so many shows going the anthology route lately, some may be wondering whether “Archive 81” is a contained story or part of an overarching series. For Sonnenshine the answer is clear: “It wasn’t conceived as a one-season show, I think there are more stories to tell,” before adding that some preliminary planning on “Archive 81” Season 2 has begun even though Netflix has not yet officially announced a second season for the series. “I think we end on a good cliffhanger that needs to be addressed, and we introduce a lot of characters that surround Dan and Melody that have very rich and interesting lives to explore further. So yeah, we hope to keep going.”