Related: Fade In Wants a Retraction — Here’s the Letter, Fade In Demands Retraction

In the summer of 2007, Patrice Williams said she received a call from Audrey Kelly, the publisher and editor-in-chief of Fade In Magazine.

Williams had won first place in the magazine’s screenwriting competition, in the "Thriller" category, she was told. She would be receiving $750, script coverage by a WGA-affiliated writer, a subscription to Fade In and a Waterman pen.

And most important, Williams said she was promised her screenplay would be introduced and promoted to producers and agents and her win would be announced in an ad in Variety or the Hollywood Reporter.

But six months passed, and Williams had yet to receive her cash prize or see an ad in the trades. So she got in touch with Kelly.

"I contacted Audrey and said, ‘It would be really nice if you were able to send out the award money as promised,’" Williams recalled. "She took that as an attack, that I was demanding the money, writing, ‘You’ll get it when all of the other winners get it.’"

In July 2008, a full year after the original call, Williams got tired of waiting. She took Kelly to small claims court. They settled in November 2008, but while Williams finally got her money, she still hasn’t seen the promised ad.

"It felt good to take first place in the competition," Williams said, "but then it turned into this ugly, nasty thing. I think they like collecting money but don’t like paying out."
And Williams is far from the only disgruntled Fade In winner.
Others say that the contest gives a false impression that it will promote them in Hollywood and give them access to top screenwriters, including Eric Roth, James Gray and Scott Rosenberg — who are listed among 10 members of the Fade In Advisory Board on the contest’s web page and in the magazine’s house ad for the contest.

But Roth, Gray and Rosenberg told TheWrap they do nothing for the magazine — or, specifically, for the contest, despite their appearance on the contest Web page and ad. They say they only have given permission for their names to be used on an Advisory Board. Moreover, no one on the Advisory Board contacted by TheWrap said that they have given notes to winning screenwriters or were otherwise involved with the contest. 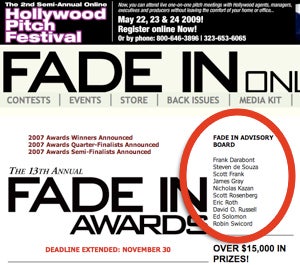 On Friday, after TheWrap inquired about it, an asterisk was added below the list of the Advisory Board on the website that reads: "Not the competition’s judges."

Other aspects of the competition also seem misleading. Apple Computers and Waterman are listed as sponsors of the competition. When contacted, both companies denied their involvement. "We are not a sponsor," Apple representative Kristin Huguet told TheWrap.

A lawyer for Audrey Kelly sent a letter TheWrap on Wednesday calling its questions "misinformed." The lawyer, Michael Plonsker, said that Fade In has "maintained a relationship" with Apple Computers and Waterman "over many years."

In an e-mail, a Waterman brand manager wrote, "We definitely did not sponsor this event."

A number of winners have had a positive experience with the contest. The competition’s web page cites a number of winners who have been signed to prestigious management firms and talent agencies like ICM and Endeavor and have gone on to make successful feature films.
"I owe my success to Fade In. These guys don’t just promise access — they deliver it," Frank Baldwin wrote in a testimonal on the magazine’s web page. "So kiss that envelope and send it in. Once Fade In gets behind you, you never know whose desk your script might land on."
But other contest winners have clashed with Kelly and complain that the Fade In Awards lure aspiring writers with promises that it does not keep.

Howard Rodman, a professor of screenwriting at USC who advises the Sundance Screenwriting Labs, said the plethora of contests in Hollywood can make it difficult to decipher which are legitimate opportunities for those looking to break into the entertainment industry.

"There are lots and lots of screenwriting contests, and many are top tier and have real value within the industry — like the Nicholl Fellowship or the Chesterfield Writer’s Film Project, which is no more," said Rodman, who said he was unfamiliar with the details of the Fade In Awards. "And then there’s all of these other contests that seem to make far more in entry fees than they give out in prizes. These contests prey on your insecurities as a writer or your very legitimate hunger to get access to an industry."

Launched in 1994, Fade In magazine covers the film industry and often features interviews with celebrities — Daniel Craig is on the most recent cover. According to the magazine’s media kit, its readership was 699,000 in 2008.

A lawsuit filed in 2002 by Kelly’s former business associate Douglas Q. Amaturo said that Kelly is CEO, Secretary, CFO, President, Director and Sole Shareholder of TWN, which owns Fade In. She is also its publisher and editor-in-chief.

In 1996, the magazine started the Fade In Awards, which promises to "assist talented new writers and writer/directors in getting recognized within the Hollywood community in order to begin a career as a working filmmaker." The contest has a $45 entry fee.

The grand prize winner is supposed to win an iMac computer and an expense-paid trip to meet with top literary agents and studio executives for three days and two nights (or the cash equivalent). Overall, the contest promises more than $15,000 in cash and prizes. Lesser winners are also promised various awards.

Complaints about the awards have made their way to the Internet, where commenters have warned other contest winners about their experiences.

Last fall, aspiring screenwriter David Schumacher received a letter from Kelly informing him he had won first place in two categories of the awards. The list of winners was published online.

"This has never happened before," Schumacher said Kelly told him during a phone conversation about his double win. "I’m gonna put you on the map. We’re going to build a huge ad campaign around you."

Shortly after this conversation, Schumacher got wind of the contest’s negative reputation. So he called Kelly to ask her about the reports. The two argued, he said.

When the magazine’s latest issue was published, other entrants were named as the winners in the categories where Schumacher had been told he’d won.

Schumacher said the Advisory Board list on the contest page is what prompted him to enter. But months after he won, he still had not received notes on his manuscripts. So he reached out to Kelly to ask when he could expect them; he said she assured him the Board had been and would continue to be involved with his work.

"I specifically asked her about who read and selected the winning scripts. And she said, ‘That is what the Advisory Board is for. They participate in the selection of the winners and provide notes that you’re supposed to go back and look at and work on,’" Schumacher said. "I said, ‘I’m very interested in getting those notes — are those people not incredibly busy and buried in their own work coming off of the Writers Strike?’ And she assured me I would get the notes from them."
But through her lawyer, Kelly said this was not so. "Fade In has never advised contestants that its Board of Advisors are the judges in the competition or that they would do notes on winners’ screenplays," the letter said. "Although Advisory Board members have in the past read a few of the award-winning scripts, they have never judged the entries."
Screenwriter Eric Roth, also on the Advisory Board — and an Oscar winner for "Forrest Gump" and an Oscar nominee for "The Curious Case of Benjamin Button" — told TheWrap in an e-mail he did nothing for the contest. "[I] know nothing about the magazine and certainly not a judge for anything," Roth wrote. "I am adviser to nobody but me, and my children, and neither of us pay any attention to me."

Through a publicist, Roth later said he had "forgotten" he was on the Advisory Board. Rosenberg, writer of "High Fidelity" and "Con Air," also initially denied any involvement, but then remembered Kelly.

"You know, now that I think about it," he wrote in an e-mail a few hours after being contacted by TheWrap, "maybe a mutual friend many years ago told me she asked him to ask me if she could use my name for something and I said it was cool, because they had been good to me early in my career."

A representative for James Gray ("Two Lovers") initially denied the writer’s involvement but later said he is a part of the Advisory Board, though he’s "certainly not doing anything actively for them in the moment."

Scott Frank, Nicholas Kazan, Frank Darabont and Robin Swicord all confirmed they are members of the Advisory Board, though they declined to discuss their level of involvement with the magazine.

The remaining members of the Board — Ed Solomon, David O. Russell, and Steven de Souza — could not be reached for comment.

But according to the 2002 lawsuit filed by former business associate Amaturo, Kelly was living a lavish lifestyle.

She "was the only driver of a Porsche paid for by TWN. TWN even paid the car insurance," Amaturo’s complaint says. "TWN paid Audrey Kelly’s personal expenses — including Kelly’s rent for her residence, the utilities for said residence (and all restaurant costs on her credit card)."

Meanwhile, a number of contestants have still yet to see the money and prizes they were promised.
Powell Weaver won first place in the 2007 "Comedy" category. He was promised the same prizes as Patrice Williams, but has only seen a Waterman pen to date.

"I’m happy to have won and it’s an honor, but it’s a tease," Weaver said. "I kept asking Audrey if I was going to get paid and she’d say, ‘It’s coming, it’s coming.’ At this point, it doesn’t feel worth it to keep trying."

Craig Berger, who took second place in the "Comedy" category in 2005, did receive all of his promised prizes. But he believed that the magazine would help him get representation and meeting with producers. That didn’t happen.

"She said ‘I’ll put together a list of 10 agents who we can talk about your script with,’ but that never happened," Berger said. "I was disappointed that that didn’t happen because what we really want in these contests is access. But I sort of gave up."

"Unfortunately, I think way too many people regard screenwriting as the powerball lottery or something," USC’s Rodman said. "Many say ‘I don’t really like the life I’m living now, I’m gonna write a screenplay and sell it and make a million dollars.’ So I think screenwriting contests have some utility, but when you regard them as your ticket to a new life — it’s a slippery slope."