Michael Ovitz should officially hand over the keys of the kingdom to a fast-talking, trash-mouthed, steam-rolling successor to his Hollywood dominion.

It is a rare moment in time and space that allows Ariel Zev Emanuel to hold the kind of power that even Ovitz could only dream about, chronicled today on the front page of the New York Times and concurrently noted by Kim Masters at the Daily Beast. 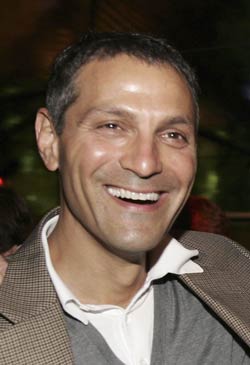 Emanuel, 48, “has emerged in the last six weeks as the pre-eminent power player in Hollywood that has often bemoaned the sunset of powerful moguls,” said the Times.

Calling Emanuel a “don,” Masters wrote: “With the speed of what was lurking in the waters in Jaws, (Emanuel) dispatched top man Jim Wiatt to that nether region where Ovitz now resides.”

An unnamed colleague in the Times put it more bluntly: “Ari wants an empire”

Here’s what’s unique about this moment: Over 18 months of hard-selling, Emanuel has just pulled off a “merger” that had William Morris paying Endeavor millions of dollars. And in a matter of weeks he’s turned it into a takeover, firing dozens of Morris agents, while leaving Endeavor more or less intact.

He has quickly shoved Morris chairman Jim Wiatt to the sidelines, with the Times reporting that Wiatt has decided to leave the agency in the coming months and one rumor suggesting that the agency ex-chief may go work with Chase Carey at News Corp. (An individual close to Wiatt denied it.)

The stage has been set for some time. Emanuel cannily figured out how to create positive spin in the blogosphere as he plotted — with a hotline to agency-central’s Deadline Hollywood Daily that guaranteed Nikki Finke’s scoops, while ensuring Emanuel positive coverage throughout the merger-takeover process.

He already has a television avatar in Jeremy Piven’s Ari Gold, who channels Emanuel’s testosterone temperament with barely a touch of hyperbole. (I nearly choked when I heard a teenager say the other day that they wanted to be just like him.)

Finally, Emanuel holds an ace in the hole that most could only dream about: His brother Rahm runs the White House.

Mike Ovitz, Lew Wasserman and Louis B. Mayer would all have to tip their hats before this kind of power play.

The media observers who know this terrain well note that Emanuel is wasting no time in — as George Bush might say — using his mandate. The Times chronicles a temper tantrum with NBC’s Marc Graboff over “Medium” that ended with the show landing at CBS and Emanuel threatening Graboff with “personal ruin.”

Where is Emanuel’s Achilles heel? Every power broker has one. Every mogul has his fatal flaw. Emanuel has an awful lot of them, but it’s too early to say which character trait — which so far has catapulted him to a rare perch — may also do him in.

With Ovitz, it was arrogance (comes with the territory) and a penchant for personal perfidy (who can forget his preempting the house purchase of his partner, Ron Meyer, by buying it first?).

With Emanuel — he may have a good, long run ahead of him — before that becomes evident. “As Hollywood stories go, that is a good start,” says the Times’ Michael Cieply and Brooks Barnes. “But it needs a third act.”

Masters is not so sure.

"Since Ovitz’s fall, his former underlings at CAA have built a machine that continues to dominate. Replicating that achievement may no longer be possible," she writes.

"Ari doesn’t have the dominoes," says a producer who has known him for many years. "The nature of the world has changed."