Actresses Javicia Leslie, Ariana DeBose, Tiffany Boone and Ashley Park came together at TheWrap’s BE Conference on Tuesday for a panel about the future of diversity on screen and behind the scenes in Hollywood. The four up-and-coming stars told TheWrap TV reporter Jennifer Maas that they hope the push for better representation among minorities in the industry isn’t just a phase amid social unrest, including the recent amplification of Black Lives Matter and anti-Asian hate movements.

“Obviously the industry moves in waves. I think that we need to be a little bit more controlling of this wave and making sure that it’s not just a wave,” Leslie, who stars on The CW’s “Batwoman,” said during the panel, titled “Next Gen Hollywood: Inspiring Change Through Storytelling.” “We’re blessed enough to sit here and talk, but when I see us, I think about the women that opened up the doors for us to even get here. Those are, like, four waves ago. And then it didn’t become our time again for another few generations.” 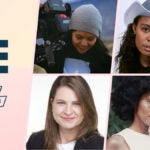 Also Read:
Adobe Hosts a Conversation on Creativity with Groundbreaking Filmmakers, Entrepreneurs and Photographers at BE Conference 2021

Leslie referred to stars like Dorothy Dandridge, Ella Fitzgerald and Billie Holiday, noting the latter artist was recently portrayed by Academy Award nominee Andra Day in “The United States Vs. Billie Holiday.” Leslie pointed to those three as examples of women whose work “created these opportunities for us, [and] we’re now playing them.”

“But that wasn’t that long ago. And there are so many waves that have happened just in that short amount of time,” Leslie said. “I think that’s my biggest thing, and that’s the thing that I’m kind of scared about, is that we talk about the past like it was 100 years ago. It wasn’t. My grandmother was at Dr. Martin Luther King’s speech, so it wasn’t that long ago. I just pray, and what I want from us and our generation is that we try our hardest to make sure that this isn’t a short wave… I need this wave to not be a wave.”

“I was talking to Steven Canals, who created ‘Pose,’ about how impactful that show has been for so many people. But something that Steven was saying is that people think that we’ve just checked the box on the trans show now,” Park said. “‘Minari’ did so well, ‘Parasite,’ great. ‘Good job to us, we recognized an Asian movie, we don’t need any more.'”

“In years past, where you go to a casting office and I’m sitting in a room full of white girls, both feeling honored that, ‘Oh, great, I’ve crossed a barrier,’ but also being like, ‘Oh, they got to check their box,'” the “Girls5Eva” star added. “And I’d made it easy for them. They brought in that Asian girl. I know walking in that room, there is not a chance they are considering me, but they did that. So I think that’s exactly what [Leslie] is saying. This can’t just be a cute moment. This wave has to be a permanent thing.”

So how do we make sure improvement in Hollywood actually happens? Park said what’s going to “move us forward” is “realizing how complicit we’ve been in order to get to where we are, because we’ve had to play into this system.”

“We’ve had to infiltrate this system. Tokenism, what that did to us is say there is only room for one… We have to fight each other’s fights,” Park said. “I have to be so f–ing proud of every Black girl who gets a part. And I hope the same for me, because we are told that there is only space for one. I just think that cheering each other on is hopefully going to make this not just a wave.”

DeBose, who is playing Anita in Steven Spielberg’s upcoming “West Side Story” remake and starred in Ryan Murphy’s “The Prom,” expanded on Park’s comments about infiltrating white systems, saying she has to “have that important conversation with myself about proximity to whiteness.”

“And that, actually, there is nothing wrong with how I, we, many women have had to navigate the spaces in order to be where we are,” the “Hamilton” alum added. “Because now is the time where we get to make change and call out the fact that we shouldn’t have had to do that. That we never should have been put in this position to have to say, ‘Yes, I have what I have, I’ve worked incredibly hard for what I have, but I had to navigate the system to get here because there was not a system that actually made space for me.’ I think a lot about that because I have trouble sometimes with it. It’s part of my self-work, not feeling bad about the opportunities that I have because it’s been my dream to be in the room that I’m in. Also, part of my mission — and I know it’s y’alls mission, too — is to make more spaces for more of us… It’s part of our job as public figures now to ask, how can we make more spaces for us?”

DeBose, who is also appearing in Lorne Michaels’ upcoming Apple TV+ musical comedy series “Schmigadoon!,” said she benefitted as a child from not understanding there was a difference between her and white actresses she saw on screen. Now, she worries for children who think they are not the same because of the color of their skin.

“I really do believe this: If I had realized that there was a difference between me and someone like Meryl Streep, I wouldn’t have pursued my dreams,” she said. “That’s scary to realize that there are young people who see drastic differences between what’s on the screen and who they are. And they are told that they cannot. I don’t know what planet I was on, but I’m glad I was there.”

Boone, who is starring in Hulu’s upcoming “Nine Perfect Strangers” limited series alongside Nicole Kidman and Melissa McCarthy, echoed DeBose’s decision to try to shift her attention to the positive, rather than her fears about the future, in the hope she can carve out an easier path for others. 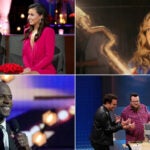 “My fears for this business, the list does not stop. Listening to you, Ariana, be like, ‘I’m not going to focus on the fears of it, I’m going to reposition the thinking’ — I need to take a note on that because I live in the fear a lot,” Boone, who also stars on Amazon Prime Video’s Nazi-hunting drama “Hunters,” said. “I feel a lot of weight from everything that is going on. I feel so much weight.”

Boone then detailed a recent conversation she had with a friend who is a Black woman directing her first feature and feels ashamed of “kind of having an easy time.”

“I feel like, for so many of us, so many women of color, we feel like we’re not worthy of so many things,” the “Little Fires Everywhere” alum added. “Like when something happens, why me? I mean, I deal with that every single day. I feel the weight of all of that, because for me, to think that there would be a little girl who is like Ariana and thinks she can do everything, that there are girls that look like me and think that they can do X, Y and Z, because of that. Or a fresh actress coming out of college or drama school and being like, all of these doors are wide open because these ladies right here did some of that kicking.”

She continued: “So my fear is that for some of us, it’s going to continue to be really, really hard because of that responsibility. There are times when I am so exhausted from that responsibility. Like when I’m on a set and I’m like, ‘Are you all serious? Do I really have to have this conversation with you? Do I really have to sit in my trailer and cry and call my manager and figure out how I’m going to have this conversation with this producer or this director? And I’m going to be the angry Black woman?’ All of that, every time I feel that, I go, ‘Yeah, you’re going to have to do it again, girl, because one day there is going to be a girl who doesn’t have to do that because you and all the other women that are doing it right now are doing it.'”

Boone said she knows she and Park, Leslie and DeBose are “doing that work,” along with so many other women of color in the industry.

“So that fear I have, I’m just going to have to keep pushing through it. Because at the end of the day, it might be hard for us, but my daughter — I mean, I really hope none of my kids want to be actors, but let’s say they do — my daughter, my nieces, the people who are coming up after us, all the s–t that we have to put up with, hopefully they won’t have to.”

Watch TheWrap’s full interview with Leslie, Park, DeBose and Boone via the video above.