Ariana Grande is coming to “The Voice” and she is coming to win. In a new teaser for the fall season of the NBC singing competition, Grande has her own custom buzzer to shade her fellow coaches.

In the clip, coach John Legend voices his concerns about having Grande on the panel this time around, knowing that competitors will likely be huge fans of hers. “Ariana is very talented. It’s going to be hard to convince someone to come to Team Legend, but I’m going to make my case,” he says.

As he continues trying to convince a contestant to be on his team, Grande hits her buzzer once more — having apparently turned her chair for the same contestant — causing a quick snippet of “Thank U, Next” to start playing. The other coaches all laugh at the moment, including Legend, as Grande looks around pretending to be confused about what happened.

That said, for as savage as Grande may be with Legend and the other coaches this season, it’ll be a different story with her actual team. According to Clyde Lieberman, supervising producer on “The Voice,” Grande is very serious about helping the artists she recruits. 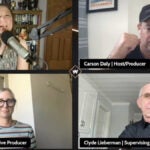 Also Read:
Carson Daly Knows Which Coach’s Team He Would Join on ‘The Voice’ (Video)

“She envelops her team in so much love that you would feel really safe being on her team, like she was going to look out for you,” Lieberman told TheWrap earlier this month.

He added that Grande’s energy on set has been nothing but beneficial for everyone involved with the show since the moment she arrived.

“You could just feel that she felt lucky and fortunate to be a successful music artist and that she thought this opportunity all of a sudden dropped in her lap to work with people who want to have careers, and [who] have talent, and she was all in,” Lieberman added. “I’m not even kidding a little bit. You could feel ‘all in’ the very first time she talked about this.”

You can watch the latest teaser for “The Voice” above.