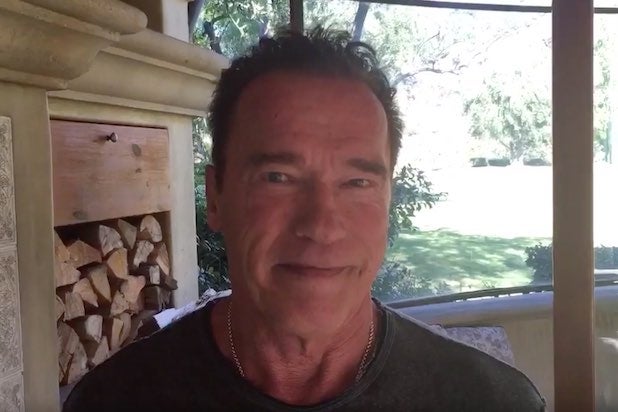 It appears as if the American public can look forward to four years of feuding between President Donald Trump and Arnold Schwarzenegger — at least as long as “The New Celebrity Apprentice” remains on the air.

“Hey Donald, I have a great idea. Why don’t we switch jobs?” the action star said in the video (below). “You take over TV, because you’re such an expert in ratings, and I take over your job and then people can finally sleep comfortably again.”

Here’s what Trump said during the event: “When I ran for president, I had to leave the show. They hired a big, big movie star Arnold Schwarzenegger to take my place and we know how that turned out. The ratings went right down the tubes.”

The POTUS called Schwarzenegger’s turn as boss of the reality show “a total disaster,” while adding producer Mark Burnett will “never bet against Trump again.” He then asked the crowd at the Washington Hilton to “pray for Arnold.”

“The New Celebrity Apprentice” ratings hit a season low on Jan. 23 when the show averaged a 1.0 rating in the key adults 18-49 demographic and 3.8 million viewers during its 8-10 p.m. time slot on NBC. That is down just under 16 percent in the key demo and just under 12 percent in total viewers compared to last week, when the show had actually improved from the week before.

This is the second time Schwarzenegger and Trump have traded blows in 2017.

In early January, Trump took to Twitter to say, “Wow, the ratings are in and Arnold Schwarzenegger got ‘swamped’ (or destroyed) by comparison to the ratings machine, DJT. So much for being a movie star-and that was season 1 compared to season 14. Now compare him to my season 1.”

“But who cares, he supported Kasich & Hillary,” Trump concluded.

Schwarzenegger was quick to respond with, “I wish you the best of luck and I hope you’ll work for ALL of the American people as aggressively as you worked for your ratings.”