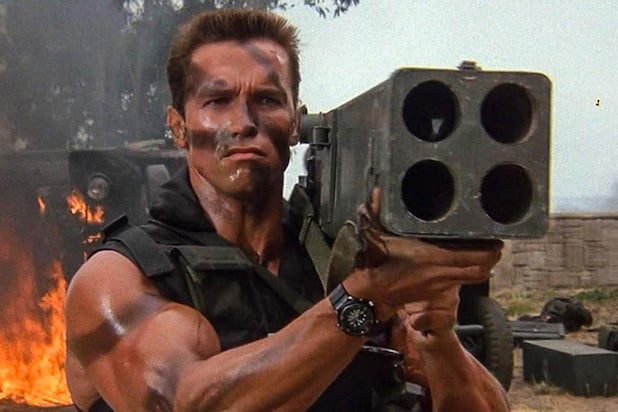 Arnold Schwarzenegger gave a surprise Reddit AMA on Thursday in which he shared an idea he had for his 1985 action film “Commando” that was so wild and violent that bringing it up got him thrown out of producer Lawrence Gordon’s office.

Schwarzenegger went to Reddit to share the trailer for “Terminator: Dark Fate,” which could technically get your post deleted if you’re involved in the thing you’re promoting, but the fact that it was Schwarzenegger himself sharing it surprised the crowd of Redditors.

Arnie ended up answering a variety of questions, ranging from giving to advice for younger generations and how his back is doing after he was attacked in South Africa.

But when he was asked about how unexpectedly funny “Commando” was, Schwarzenegger said he wanted to delve even deeper into the topic.

“I wanted to cut off a guy’s arm and kill him with it. This wasn’t in the script. He would throw a knife at me and after he missed, while his arm was still extended, I chop it off at the shoulder with a machete and beat him to death with it,” Schwarzenegger said. “Needless to say, I was asked by the head of the studio, Larry Gordon to come to his office. And he said ‘what the f— is the matter with you? Do you want to make money with this movie or an x-rated movie?’ I said “you’re right” and he said ‘get the f— out of my office.'”

One commenter even chimed in with a great line he could’ve said in the moment, “Thanks for lending me a hand,” to which Schwarzenegger replied, “You’re hired.”

Elsewhere in the Reddit thread, Arnold said he’d most like to revisit his take on Conan the Barbarian if given the chance. And he also was asked if he’s feeling better after video last week captured Schwarzenegger being attacked by a man at one of his events in South Africa.

Also Read: Arnold Schwarzenegger Drop-Kicked in the Back During Sporting Event in South Africa (Video)

“How can I feel better when I didn’t ever feel bad,” Schwarzenegger said. “I didn’t press charges and hope he gets his life on track. That’s no way to get a Lamborghini,” referring to the man reportedly saying, “help me, I need a Lamborghini,” as security escorted him out.

Take a look at the whole Reddit exchange here.