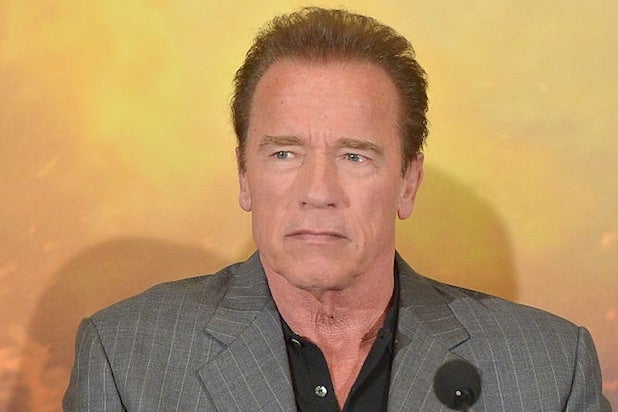 If Arnold Schwarzenegger wants to become a U.S. Senator, he’d better hope those casting their ballots in the election weren’t also recently polled by the Q Scores Company.

The consumer appeal measurement group’s latest results show Schwarzenegger’s Positive Q Scores are down from a year ago. Perhaps the Muscle Beach legend shouldn’t have taken over the “Celebrity Apprentice” gig from Donald Trump.

Among adults 18 and older, the “Kindergarten Cop” star’s Positive Q Score dropped from 18 percent to 14 percent, TheWrap has learned. Basically, that means 18 percent of respondents to the Q Scores Company’s year-ago questionnaire said Schwarzenegger ranked among their favorite personalities. These days, four percent fewer are singing his praises.

For males 18-plus — his strongest demo — Arnold’s Positive Q Score fell from 25 percent in 2016 to 20 percent in 2017. As far as adult females, Schwarzenegger fell out of favor there to the new tune of 9 percent, versus his old one of 12 percent. That public’s perception could prove quite an issue for any kind of public-office comeback.

But what is a Q Score, anyway? Company executive vice president Henry Schafer believes that his numbers can make or break a career — and his clients agree. They include agents, studios, and networks.

To create the scores, Schafer’s team provides a personality’s name and a brief description to about 1,800 people. They don’t offer photos because those can skew judgements. Respondents are asked if they know a celebrity, and if the star is among their favorites — or least favorites.

For every Positive Q Score, there’s a Negative one. Sorry, Arnold — we’ve got those, too.

The former bodybuilder’s overall Negative Q Score just rose from 27 percent to 32 percent among all adults.

Breaking it down again by the genders, Schwarzenegger’s Negative Q Score among males rose from 18 percent to 25 percent. Women disliked him more to begin with — now his negative number is up to 38 percent from 35 percent in 2016.

OK, so the seven-time Mr. Olympia has had a rough year in the general public’s mind — or hearts, really — but one needs a baseline to make sense of it all. On average, a program host has a 15 percent Positive Q Score and a 22 percent Negative Q Score among adults, Schafer told TheWrap. That means Schwarzenegger just dropped below average among his fans, and has become way worse than normal in terms of detractors.

“He clearly became a much more polarizing personality as a result of his stint on ‘Celebrity Apprentice,'” Schafer summarized for us.

The good news is that with a 90 percent Familiarity rating, Schwarzenegger is nearly universally known in his adopted home country. That just doesn’t mean he’s liked, obviously. The terrible TV ratings for the latest “Celebrity Apprentice” season would tend to agree with that assertion.

The former California governor and “Terminator” actor is said to be eyeing the 2018 Senate race, when Democrat, Sen. Dianne Feinstein, would be up for reelection at 85 years old, according to a Politico report.

Ironically, one of the political media outlet’s sources said that part of Schwarzenegger’s motivation is to “jam Trump” for the 16 months that will remain at the time of the Commander-in-Chief’s first term. Yes, that’s the same guy whose shared association from the NBC reality competition could prevent Schwarzenegger’s election in the first place.