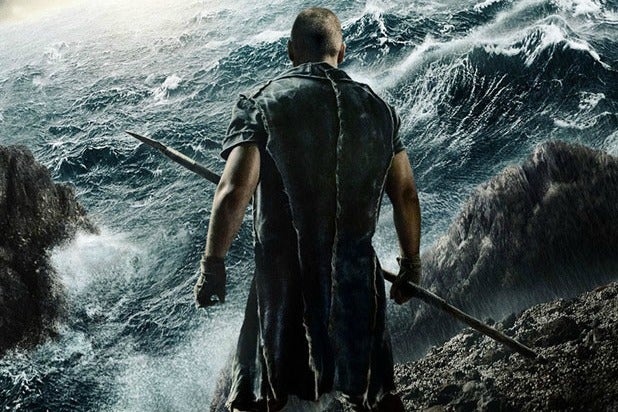 It’s not sci-fi, it’s “cli fi.” Also known as climate fiction, it’s an emerging genre that film directors have been exploring recently. Now the genre is about to get red hot, post-Super Typhoon Haiyan (or “sea sparrow” when translated to English).

Hollywood crews often go to Iceland to film climate disaster movies on location, for TV specials or what later turns out to be blockbuster feature movies. Expect more location shoots there in future years, as the world heats up in tiny increments and the polar ice caps melt summer after summer. Drip, drip, drip.

But this emerging genre of “cli fi” movies, from “Day After Tomorrow” to “The Road,” is about to get some Old World company early in 2014 when director Darren Aronofsky’s “Noah” is released in March.

Yes, that Noah, and yes, that flood. Post Super Typhoon Haiyan, and Superstorm Sandy, hold on to your theater seats. “Noah” is not set in the usual “cli-fi” dystopia in the near or distant future; this movie is set some 5,000 years ago in the dreadful, tragic, Biblical past.

Starring Russell Crowe, Emma Watson, Anthony Hopkins and a real wooden Ark, built on location in New York state, this is the kind of Hollywood film that will put Superstorm Sandy in its place.

“Noah” was shot on location in Iceland — and in parts of Long Island in New York during Superstorm Sandy — and the film is now in its post-production editing and computer-graphics process.

Sadly, some misguided Christian fundamentalists and Orthodox Jewish fundamentalists are already protesting Aronofsky’s movie, complaining it does not follow God’s words as written down in the Holy Bible by pre-Internet scribes speaking Aramaic or Greek.

As usual, the religious nuts come out of the woodwork for films like this, and in a land of freedom of speech, let them complain. They only give their Good Book a black eye. Noah never even existed, for crying out Zeus!

Aronofsky, educated at the same Harvard where Gore invented the Internet, has put a lot of time and effort in his “Noah” project, as any quick take of his Twitter feed will attest.

He cares about this film, and he has put his cast and crew through the ancient flood “event” in order to do two things: entertain audiences with a vivid, detailed visit to a terrible tale from the Bible, and set up a global ”wake up call” about what humans are doing to the Earth today.

Think a “flood” like Noah’s can’t happen again? Think again. And America’s long coastlines will bear the brunt of it, too, if and when it happens. Start praying, if you’re religious. And start moving to higher ground, if you care about the future.

While “cli fi” has been defined by NPR and the Christian Science Monitor as taking place only in the present or near future — in novels such as Barbara Kingsolver’s “Flight Behavior” and Nathaniel Rich’s Superstorm Sandy novel “Odds Against Tomorrow” — in fact, ”cli fi” can take place in the distant past, too. Even in Noah’s time. Even during the Flood, the flood to end all floods.

While the marketing for “Noah” has not begun, Aronofsky’s eccentric idea to film a global warming ”warning call” based on an imaginary “event” some 5,000 years ago in the Biblical past has legs. Long legs. And we’re going to be in it for the long haul, too.

This movie could become a global hit, and for one main reason: every nation on Earth is in the direct path of the next big flood and it could be curtains for the human race. Ask James Lovelock.

Sounds like sci-fi, right? But this time it’s ”cli fi,” with a stellar cast and computer graphics to tickle your Biblical imagination.