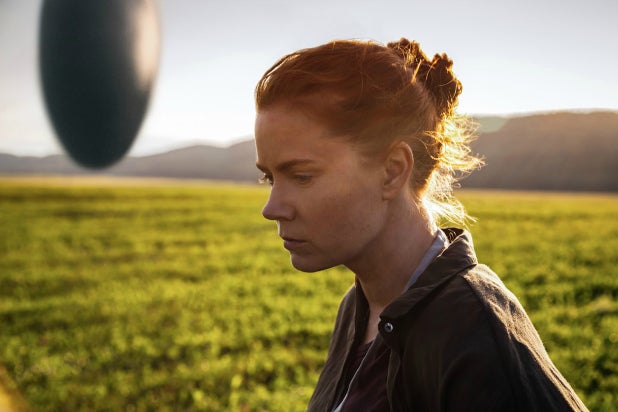 At the climax of Alan Moore’s acclaimed graphic novel “Watchmen,” a billionaire scientist fakes an alien invasion of earth as a way to end U.S./Soviet aggression and to force the fractious nations of our planet to unite against a foe. Denis Villeneuve‘s latest directorial effort “Arrival” assumes the opposite, presenting a world where even extra-planetary visitors can’t necessarily make humanity work in tandem.

Not that this is a cynical movie, mind you; like last year’s “The Martian,” it’s about smart, driven people using their know-how to solve seemingly insurmountable problems and to answer the toughest questions. But while that film injected humor into the mix, “Arrival” is a fairly chilly, cerebral bit of business, from its beautifully tamped-down cinematography (by modern master Bradford Young) to Jóhann Jóhannsson’s ethereal score.

Amy Adams stars as Dr. Louise Banks, an expert in language and linguistics at an unnamed university. She arrives at work one day to see agitated students clustering around TVs in the area, and even the few students who have shown up for her lecture appear distracted. The reason for the hubbub soon becomes clear: 12 alien ships have appeared at various areas around the globe, and no one can figure out why.

Not long after, Col. Weber (Forest Whitaker) arrives to press Dr. Banks into service, to see if she can decipher what the aliens are trying to convey. She insists that she has to look at them to figure out their grunting language, and before long she’s whisked off to Montana on a helicopter alongside Ian (Jeremy Renner), a scientist and mathematician who’s also trying to decipher the visitors’ intent.

We learn early on that Louise has a daughter who died young, and while this “Gravity”-flavored bit of backstory made me originally roll my eyes — men in movies get to be heroic as a matter of course, but women often have to be explained by their romantic or familial relationships — “Arrival” turns out to have several surprises up its sleeve that make this subplot richly resonant as the story goes on.

Playing ferociously intelligent characters is nothing new for Adams (say what you will about the recent Superman movies, she plays Lois Lane as a better investigative reporter than any of her predecessors), and she brings a wonderful sense of curiosity as a linguist faced with the challenge of translating a species that creates sentences (that look like circles) out of gas that comes out of tentacles.

Earth’s panic and differing points of view about how to deal with the aliens operate mainly in the background here, and the screenplay by Eric Heisserer (“Lights Out”), adapting a short story by Ted Chiang, balances the intricacies of how the military would address this situation (and how much they will and won’t share their findings with other world powers) and how the media and the population at large would respond.

If “Arrival” falls short in any way, it’s in a third-act pivot that attempts to appeal to the heart as much as to the head. Louise’s personal story is a powerful one, and the film never betrays this fascinating character, but it has so successfully created such a cool and detached vibe that it’s a bit jarring to get a last-minute play for the emotions. It’s not impossible to give audiences both a puzzle-box narrative and an exploration of life choices and what it means to be human, but the balance just doesn’t play here.

(For what it’s worth, the movie does play personal concerns against intergalactic ones with more grace than “Interstellar” managed to do.)

In films like “Sicario” and “Enemy,” Villeneuve remained true to his storytelling, no matter how potentially off-putting, but then neither of those were made for a major studio. Still, that slightly abrupt shift isn’t enough to significantly diminish the power and the problem-solving pleasures of “Arrival.”