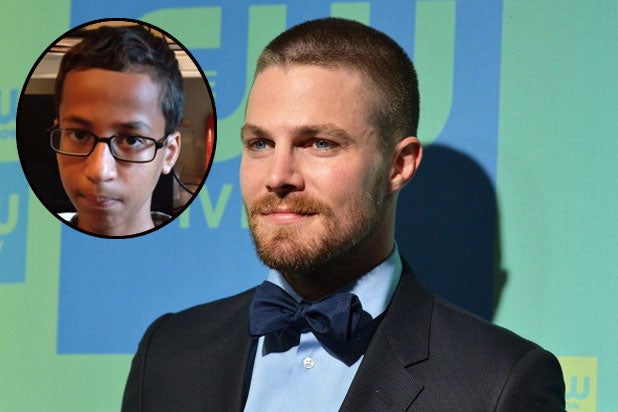 “Arrow” star Stephen Amell landed in hot water on Twitter Wednesday afternoon after he made a comment equating the treatment of 14-year-old Ahmed Mohamed to stererotypes lobbed against Texas, the state where the incident went down.

Also Read: 'Arrow' Star Stephen Amell Says He Will 'Go Away For a Bit' in Video Apologizing for Ahmed Mohamed Comments

Mohamed was arrested for bringing a self-made alarm clock to school in Irving, Texas, on Monday. The arrest has prompted questions about bias against Muslims. Ibrahim Hooper, a spokesperson for the Council on American-Islamic Relations, said that “It would not have occurred if he did not have a Muslim name and have a heritage from the Muslim world.”

Mohamed was proud of the clock he made from a circuit board with wires leading to a digital display, and wanted to show it to his teachers at MacArthur High School.

However, one teacher alerted authorities when she mistook it for a bomb, and Mohamed was put in handcuffs shortly afterwards. But realizing there was no imminent threat, the boy was released.

Since then, the #IStandWithAhmed hashtag started trending on Twitter. Even President Obama has invited Mohamed to bring his alarm clock to the White House on Twitter.

“Stephen Amell just needs to take his top off but shut his mouth,” user ShayneCaffrey said. “Talk about missing the point. I thought season 3 was bad but he’s worse.”

“@amellywood get over yourself,” said baetoul. “Nobody is “profiling” Texas, they’re talking about the rampant racism and systematic inequality present there.”

Rather than apologize or take back his remarks, Amell doubled down in subsequent tweets.

“I can’t believe I broke my rule and tweeted about an actual event. Staggering to remember that debates in 140 characters don’t work,” he wrote. “What happened to Ahmed was terrible. Obviously. I happened to read a series of tweets pronouncing that this is a systemic problem in Texas, which is also profiling…. Anywho, I’m not apologizing or deleting the tweets. If you’re outraged at an opinion it’s because you’re bored.”

But the outrage has not died down. Below is a sampling of social media reactions to the “Arrow” star’s comments.

Reps for Amell did not immediately respond to TheWrap’s request for comment.

@amellywood stop it, you're getting fucking annoying. You're 34 but you dont realize that your tweets are SO DIRESPECTFUL for Muslims.

stephen amell: yeah what happened to ahmed is bad but u kno what's a REAL crime? bringing up texas's long case history of racial prejudice

@amellywood So u are allowed to be outraged & go on a twitter rant about Texas being wrongfully profiled but wen we r outraged we are bored!

People: a kid got arrested bc of the strong islamophobia in america Stephen amell: but texas's feelings got hurt :// so

@amellywood get over yourself. Nobody is "profiling" Texas, they're talking about the rampant racism and systematic inequality present there

@amellywood this is the guy from arrow? lmfao definitely won't be watching that show anymore

Would Stephen Amell stfu about Texas. We know not all of Texas is a shitstain. That is NOT THE FUCKIN POINT FFS.

@amellywood you are so wrong.

I used to live in Texas and as a person of color, there were very many people who were not as polite to me as they were to you @amellywood

Just like Matt Damon got called out by the media for his comment on diversity, I hope the same thing happens to Stephen Amell.