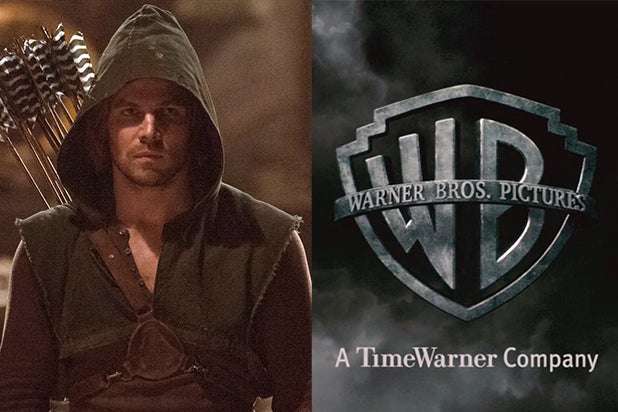 Warner Bros., you have failed this actor.

“Arrow” star Stephen Amell has criticized Warner Bros. for its “Flash” feature film announcements on Oct. 15, claiming the movie studio’s Ezra Miller casting undercut The CW’s television incarnation of “The Flash,” which had then just debuted.

“I thought that it was shitty that all of this stuff got announced the morning of the spectacular ratings of the second episodes of ‘The Flash’ came in,” he told AMC Movie News in an interview published last week, after explaining why second episodes of new series are so important from a ratings standpoint.

“I thought that the way that Warner Bros. announced the slate of DC movies could have been handled better,” he said “And I think that someone like Grant Gustin, who has just launched an iconic character like the Flash, to record breaking numbers.”

Gustin portrays The Flash on “Arrow’s” spin-off show, which debuted to record numbers for The CW in October. But on Oct. 15, Warner Bros. unveiled a new phase of its DC Comics movie lineup, which included a standalone Flash movie set for 2018 and an announcement that Miller (“The Perks of Being a Wallflower”) would star as the speedy superhero in multiple films.

Amell criticized the movie studio for poor timing, but said nothing negative about the WB’s choice in Miller over Gustin or anyone else.

“I’ve never seen a need for the television side and the feature side to crossover,” Amell explained. “This is nothing that I haven’t said before, I’m pretty sure. I’m sure that Ezra Miller will do great as the Flash.”

Amell, who plays billionaire archer Oliver Queen/Arrow on his hit CW series, implied he wouldn’t even object to the studio recasting his character.

“And if they found a great Oliver Queen, fantastic,” he said.

Amell said he’s since had “great chats” with people at Warner Bros., including DC’s chief creative officer Geoff Johns, and he cautioned against putting too much stock into what may happen so many years into the future.

“Everyone wants to judge things immediately. The plan that Warner Bros. has — and it’s a wonderful plan overall — and DC has for the introduction of the Justice League of America and all these standalone films is going to take place over the course of five, six, seven years.

“Who’s to say what’s going to happen?” he asked rhetorically.

Warner Bros. has not yet responded to TheWrap‘s request for comment.

Also read: It's a Bird, It's a Plane, It's... Hollywood's LGBT Superhero Surge