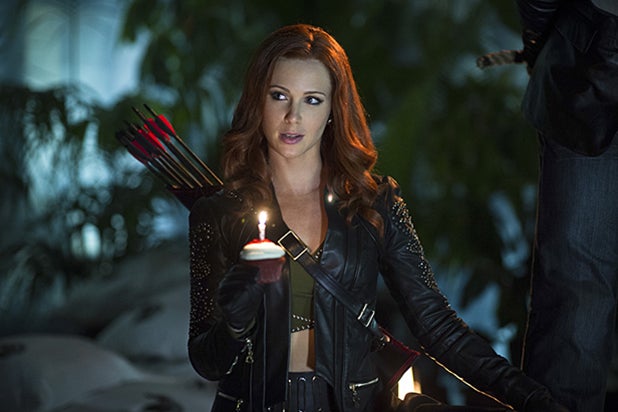 The CW’s newest “Arrow” villain has a coming out party on Wednesday’s episode of the DC Comics-inspired show, but the actress portraying redheaded bad gal has actually been trying to join the series since the very beginning.

“I auditioned for the show several times,” Amy Gumenick, who debuted as Cupid during the final scene of last week’s episode, told TheWrap. “I first auditioned when they were casting the pilot, actually, for Katie Cassidy’s role.”

Katie Cassidy plays Laurel Lance, a character who has been around since Day 1 but only recently began transitioning into the superhero Black Canary.

Gumenick didn’t land that part, but the “Supernatural” alum was impressed by the pilot’s script. So, she did what any up-and-coming actress might — she befriended casting director David Rapaport and came back to audition again and again.

“It was a show I wanted to be a part of,” Gumenick explained.

“I’ve since then auditioned for various other guest stars and recurring [roles] here and there, but the one didn’t hit,” she continued. “But [Rapaport] is a loyal and an amazingly down to earth person who really believes in his actors. So, I would go in and do my thing and trust that if the right role was there it would happen.”

And she was right.

Gumenick eventually auditioned for the role of Cupid, a well-regarded Arrow antagonist who is known in the DC Comics for both her fiery red hair and crazy personality.

The actress was blonde when she went in to read for the part, but she said the different hair color actually took some of the pressure off of her performance.

“I just went in and created my own version of the redhead,” she said.

“Arrow’s” executive producer Andrew Kreisberg had a vested interested in casting this particular actress because, unlike many decades-old characters portrayed on the show, he actually created Cupid, aka Carrie Cutter, while penning “Green Arrow” comics in 2009. According to Gumenick, he even named her after his wife.

“It was an intense scene and it was silent when I was reading,” she said. “As soon as I finished everyone exhaled and laughed. [Kreisberg] looked at me and said, ‘You have crazy in your eyes.'”

The casting was finalized in August and the actress finally made her explosive debut on last week’s episode, kicking butt in the final scene and capping off the show with the hilarious cliffhanger: “I’m Cupid, stupid.”

On Wednesday, nearly three years after her first audition, she’ll finally star in her own episode.

Her character Cupid is a villain and a killer, yes, but she’s also one motivated by her strong feelings for Arrow (Stephen Amell).

“We definitely get to meet this wild woman,” she said. “Cupid is described as a villain, but she’s really driven by love and determined to get the bad guys. She specifically goes after several of Arrow’s rivals and enemies in hopes of buying his love, so to speak.”

“There are definitely some murderous rampages that happen,” she added.

Gumenick had to wait a while to strap on her costume and join the cast of “Arrow,” but ultimately she’s pleased with how it has all turned out.

“The journeys we get to go on with [Cupid] have far surpassed anything I could have imagined in those initial auditions,” she finished. “It has been so fun. It’s been such a treat to explore that and to learn new skills. If I could have picked [which character I’d portray], I probably would’ve picked Cupid.”