Documentarian Jeffrey Blitz’s "Spellbound" was one of the most popular documentaries of recent years, mainly because it blended a high concept (spelling bee competitors) with an intelligent study of Americana. While Blitz’s current Sundance entry, "Lucky," comes nowhere near the crowd-pleasing capacity of earlier non-fiction accomplishments, it nevertheless produces an amusing feature-length essay based around a similarly alluring phenomenon: Lottery winners. 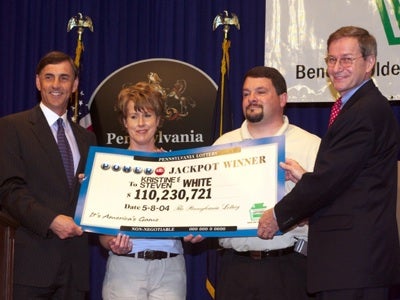 Essentially composed of mini-profiles featuring overnight millionaires and their changed lives, Blitz’s movie shows how the unexpected win often gives rise to philosophical perspectives. A couple that won $110 million emphasize the importance of not spoiling their children, while an older man previously seen as a hermit sort refuses to abandon his comfortably sloppy lifestyle.

Blitz spaces out these portraits with humorously animated sequences filled with statistics about the game and its history. The takeaway for some might be that the lottery is a waste of time and a drain of government funds. But others may simply enjoy the experience for its emphasis on blue collar Americans whose lives change overnight.

It implies a question that most viewers will indubitably contemplate: What would you do with a sudden multi-million dollar payload? As if to force the question out, the producers of the film handed out real lottery tickets to everyone in attendance at last night’s premiere. "If you win," said one representative for the film, "don’t forget us."