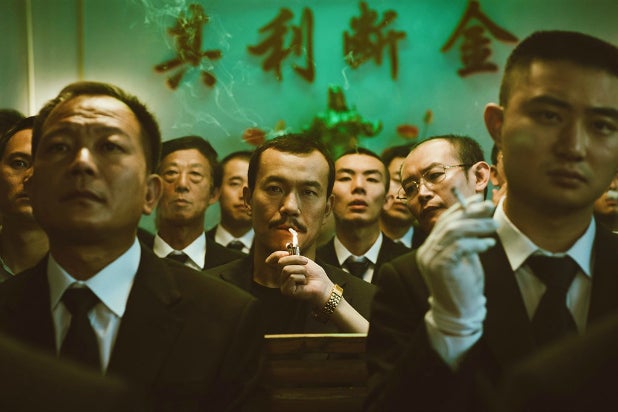 One of the ways Jia Zhangke has distinguished himself as both a leading Chinese filmmaker and a masterful director is that his images have the uncanny ability to encompass past, present, and future. Humanity fills his every frame, even if the most prominent visual element is a landscape. And when your subject is China — how a country and its people wrestle with massive shifts — it makes for a distinctly personal kind of epic, one that has put Jia in the front ranks of directors in the nearly 20 years since his youths-in-turmoil masterpiece, “Platform,” put him on the global stage.

That where we are/where we’ve been/where we’re going dynamic has, over his career, lent itself superbly to Jia’s fascination with triptych storytelling. With his latest film, the crime-romance “Ash Is Purest White” — once again spotlighting a superb performance by Zhao Tao, his longtime creative partner and wife  — Jia’s vision makes for a heady brew of love, loss, and loneliness over three-time frames that coincide with huge changes in China.

The movie opens with what appears to be documentary video footage of grim-faced citizens on a bus, and according to publicity materials, these are everyday moments Jia shot in the early 2000s that he says represent a past China. This video acts as a same-time prologue for our introduction to small-town gangster Bin (Liao Fan) and Qiao (Zhao), his cheerfully swaggering girlfriend. They’re the epitome of cool in their vice-flecked corner of traditional, provincial, coal-mining China — she shimmies in the club to “Y.M.C.A.” while he closes deals in the booth — until forces big (industrial change) and small (other hoodlums) threaten that bond, and their working-class community’s sense of cohesion.

When Bin is attacked in the street by youthful rivals — a sequence Jia manages to make simultaneously real-world scary and John Woo-ecstatic — Qiao steps in to save him with a gun, but in doing so is arrested and sentenced to five years in prison. When she’s released, it is 2006, and what she discovers as she rides a ferry down the Yangtze River, along with the site of the impending Three Gorges Dam, are populations being displaced, and a changed, distant, callously adaptive Bin, a romantic gangster turned capitalist lackey.

Qiao, her features now hardened but her mindset no less canny or observant, enters survival mode, and Jia gets some breezy humor out of the ways she navigates the transformed society to her immediate benefit. (Her scam targeting wealthy men heading toward private rooms at a fancy restaurant is particularly delightful.) But we mostly sense that she’s adrift.

The world (in this case, China) is now seemingly larger and smaller to Qiao, with old desires being met under new systems, but that much more impersonal: the gambling hall replaced by a chamber of commerce, a mobster boyfriend’s loyalty morphed into empty ambition. Not that Qiao isn’t willing to give it all a shot. But when she encounters a traveler on the train with an entrepreneurial spiel about the new adventure tourism, the way their connection plays out is simultaneously funny, poignant, and heartbreaking.

The last segment of “Ash Is Purest White” and its three-pointed saga brings Qiao to the present, back to her home province of Shanxi, and where she is reunited with Bin in the gambling hall that was once their stomping grounds. Now there’s a noticeable power shift and a harder edge to their relationship. This is Jia bringing all of his talents to bear as a chronicler of what looks familiar but is quite different, which is one way of saying that the cinematography by Eric Gautier (“Something In the Air”) is its own vivid asset in Jia’s quest to imbue each scene with a mindful sense of subtle, yet still undeniable change.

The director’s strength, however, is as always Zhao, whose face can share the frame with the vastness of a landscape, and still draws focus. She exquisitely articulates Qiao’s shift from connectedness to disillusionment and finally, alienation, with the effect so acute that you’d think “Ash Is Purest White” had been filmed across the same time 18-year period of its story.

It’s enough to leave a viewer thinking that her mesmerizing portrayals for Jia over the years are less like discrete character studies and more like chapters in the grandest composite portrait that cinema has yet seen of what it means to be human during a transformational epoch.