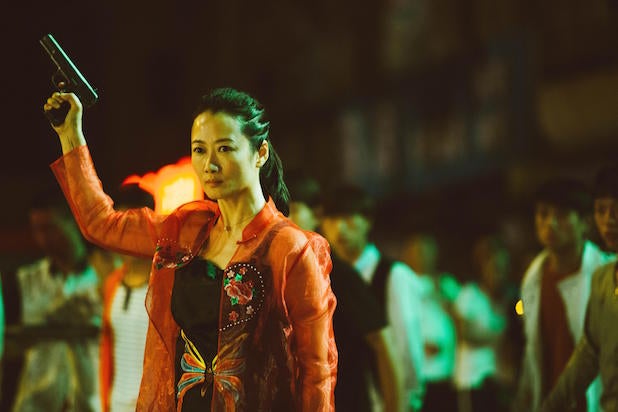 The wheels of fortune keep turning and turning in “Ash Is Purest White,” carrying onetime lovers away from each before bringing them back together, only to start the cycle again. In the ever-shifting China that has become writer/director Jia Zhang-Ke’s singular theme throughout his career, you can be on top of the world at one point, having your private chauffeur drive you 100 kilometers for dumplings, but don’t ever get too comfortable – you may have to crash weddings in order to get a hot meal the next day.

Those kinds of rapid shifts in luck are myriad in this latest work, which premiered in the main competition at the Cannes Film Festival on Friday. “Ash Is Purest White” plays in many ways like a discreet mash-up of the director’s previous two films. As in the 2013 Cannes title “A Touch of Sin,” this one also argues that China’s rapid economic rise has hardly benefited its numerous inhabitants; as in 2015’s “Mountains May Depart” this one also assumes a triptych structure in order to argue that point.

That the film condenses those two while simultaneously dulling their shaper edges – “Ash is Purest White” is less harshly violent than “A Touch of Sin,” while its transitions between chapters are far more seamless than those of “Mountains May Depart” – speaks to the fact that with this, his most expensive production to date, the director recognizes his growing international audience and might be trying to reintroduce himself on a commensurate scale.

That the opening credits are in Mandarin and English only reinforces that idea.

Larger scale or not, Jia’s hardly changing his ways. Once again he casts his wife and consistent lead actress Zhao Tao as good-hearted woman let down and eventually remade in lockstep with her country’s growing pains. The actress plays Qiao, girlfriend to the small-time hustler Bin (Liao Fan), a developer in the northern city of Datong.

When we first meet them in 2001, Bin’s on the rise, especially when his career vastly benefits from a sudden act of violence that takes out his benevolent superior. But what violence gives, it also takes away, as both learn when the film moves forward to 2006, and later all the way to the present day.

In a wonderfully subtle touch, Jia never announces these pushes in time, simply letting the evolving mobile phone technology make that point without much fanfare on the corner of the screen.

Still, for all those elegant touches, and actress Zhao’s absolute wallop of a performance, “Ash is Purest White” leaves those who have seen Jia’s previous work feeling like they’ve seen it all before. That’s one of the most frustrating quirks of the Cannes press corps, which can quickly shout disappointment when a filmmaker meets the impossibly high bar they’ve set for themselves but doesn’t quite surpass it.

Jia Zhang-Ke’s large scale reintroduction is hardly a disappointment; it’s simply another fine Jia Zhang-Ke film. What did we expect?