Ashley Judd and Mira Sorvino stepped out on the Oscar 2018 red carpet on Sunday, posing together in solidarity just a few months after a powerful Hollywood director said Harvey Weinstein tried to derail both of their careers.

In a year of the Time’s Up and #MeToo movements, which have come in the wake of dozens of accusations that have come out of Hollywood after a slew of sexual misconduct allegations against Weinstein, the presence of the two actresses was a decidedly symbolic.

“This movement isn’t stopping,” Sorvino declared in an interview with ABC on Sunday.

Ashley Judd on the #TimesUp movement: "Finally the world is able to hear because I believe that we women…our voices have been squelched." https://t.co/6YJWYVSrEb #Oscars pic.twitter.com/DosjXaL7YA

As the red carpet winds down, it’s worth noting that the two appeared to abstain from speaking with Ryan Seacrest — who himself is at the center of a sexual abuse scandal. Seacrest has denied the accusations.

Judd tweeted her support for the Time’s Up movement before she headed out for the show:

It’s is my great pleasure to introduce my #oscars2018 gown, and most especially to be so joyfully be a part of @timesupnow !!! pic.twitter.com/18DVNXysWY

Late last year, both Judd and Sorvino (pictured together below on Oscar night) responded to comments made by Peter Jackson to New Zealand’s Stuff in which he said Harvey Weinstein told him the actresses were a “nightmare” to work with.

It’s an assertion Weinstein himself has denied.

Weinstein’s alleged blacklisting of the two actresses led to both of them missing out on roles in Jackson’s “Lord of the Rings” films because of negative things the disgraced movie mogul had said about them, according to the report. 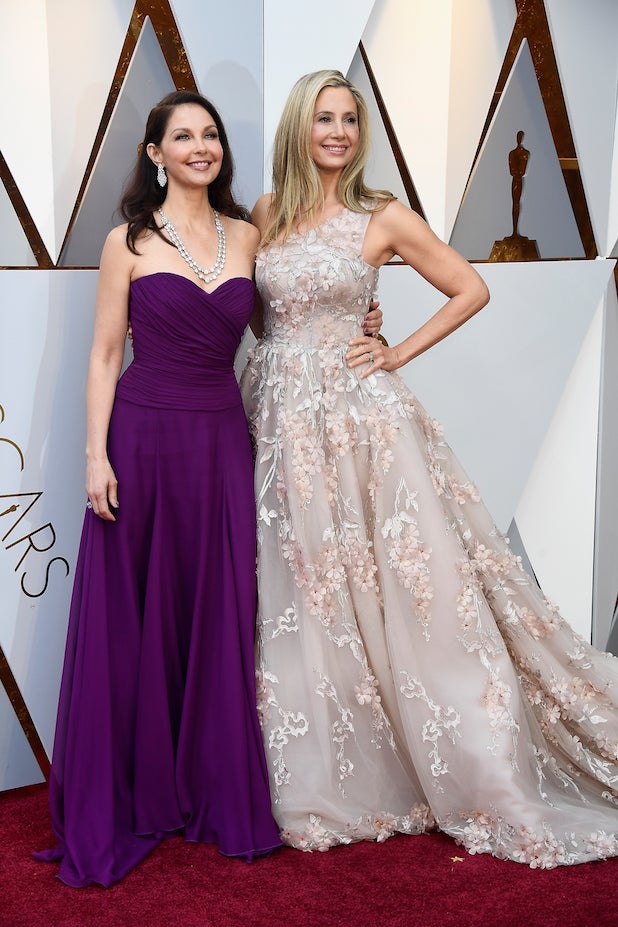 I remember this well. https://t.co/wctEhESAS9

Sorvino also retweeted it, adding: “Just seeing this after I awoke, I burst out crying. There it is, confirmation that Harvey Weinstein derailed my career, something I suspected but was unsure. Thank you Peter Jackson for being honest. I’m just heartsick.”

Just seeing this after I awoke, I burst out crying. There it is, confirmation that Harvey Weinstein derailed my career, something I suspected but was unsure. Thank you Peter Jackson for being honest. I’m just heartsick https://t.co/ljK9NqICbm

“I recall Miramax telling us they were a nightmare to work with and we should avoid them at all costs. This was probably in 1998,” Jackson said, referring to when he was pitching his ideas for the “Lord of the Rings” and “The Hobbit” trilogies.

“At the time, we had no reason to question what these guys were telling us — but in hindsight, I realize that this was very likely the Miramax smear campaign in full swing,” he said. “I now suspect we were fed false information about both of these talented women — and as a direct result their names were removed from our casting list.”

Jackson added that it turned out that Harvey and Bob were the difficult ones to work with. “My experience, when Miramax controlled the ‘Lord of the Rings’ (before New Line took over production of the film), was of Weinstein and his brother behaving like second-rate Mafia bullies. They weren’t the type of guys I wanted to work with — so I haven’t.”

The filmmaker said that Weinstein’s credit on the movies is there because it had to be, not because he was involved with the movies he made, and once New Line took over, Miramax’s only involvement was distribution.

But Weinstein, through a spokesperson, denied that claim late last year, saying that Miramax “lost the project and all casting was done by New Line.” The embattled former movie executive, who was ousted from The Weinstein Company in October following a flood of sexual misconduct complaints, also said he was unaware of of any complaints or issues from either Judd or Sorvino.