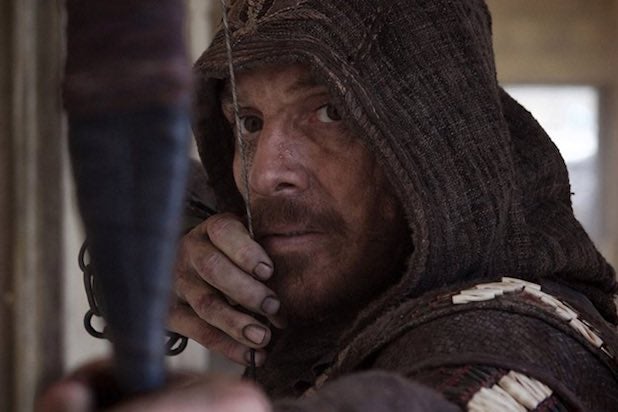 If you thought Michael Fassbender, Marion Cotillard and the director of the latest “Macbeth” adaptation could break the video game curse that has plagued Hollywood since the releases of “Super Mario Bros.” and “Double Dragon” — think again.

“Assassin’s Creed,” the adaptation of a popular Ubisoft franchise, is getting hammered by critics. Top cited offenses include a convoluted and confusing plot, lousy dialogue, and missed opportunities to make it better. The 20th Century Fox release has a mere 19 percent approval rating from 31 critics counted on Rotten Tomatoes, so far. That percentage could rise as more reviews pour in ahead of its theatrical debut on Wednesday, but with many critics citing similar complaints, it’s more likely that the approval rating will continue to drop.

But for many, the critical reaction to this video game adaption is no surprise. In fact, it’s hard to think of one that got any praise beforehand. TheWrap’s film critic Michael Nordine called the action flick that jumps between the past and present “Another Bad Video-Game Movie.”

“Fans of the video game franchise are likely to be even more disappointed than those merely looking for a historical action flick,” Nordine wrote in his review. “The plot is that most dreadful of mixes: both laughably silly and needlessly complicated.”

That’s a pretty good summation of what critics thought. Even those reviews declared “fresh” on Rotten Tomatoes aren’t singing endorsements for the $130 million movie hoping to bloom into a blockbuster franchise.

Digital Spy‘s Rosie Fletcher rules it “sort of” beats the low expectations set for video game adaptations, but “is unfortunately just the tale of a bloke killing a bunch of people and hunting for a thing.” Meanwhile, IndieWire‘s David Ehrlich described the “Assassin’s Creed” as “captivatingly bonkers” and “utterly ridiculous,” even noting the point in the plot “where s— gets silly,” but he still enjoyed the action enough to give it a B- and crave a sequel.

But since the majority of critics were unable to find a silver lining, here are excerpts from 7 of the worst reviews.

“Even in a year that gave us ‘Independence Day: Resurgence,’ I’m hard pressed to think of anything as convoluted and, in the end, as joyless and unrewarding as this. Yes, ‘Assassin’s Creed’ is attempting to give a serious narrative origin story to the popular video game, ostensibly setting up interest in possible future films. But it’s hard to even feign interest in this one, let alone what might come next. Director Justin Kurzel’s film embodies the worst tendencies of modern blockbusters to feel not like a full movie, but a tease for what’s to come – a television pilot on the big screen.”

“The plot of ‘Assassin’s Creed’ is very confusing. No, scratch that: It’s a mess. You might not really care, but the movie–directed by Justin Kurzel, the Australian director whose last picture was a supergritty version of ‘Macbeth,’ also starring Fassbender and Cotillard–is rife with squandered opportunities. At one point, some sort of 15th century enemy Knight scrambles along a rooftop on his horse. This is fascinating: A horse on a rooftop! How did he get there? How did he get down? These are questions the movie never answers. Cool image, though. There are other flaws: When Fassbender as Callum is shirtless, ‘Assassin’s Creed’ at least nods in the direction of camp juiciness. But in the Aguilar sequences, Fassbender wears a robe of suitably penitential rough cloth, befitting the character’s seriousness of purpose. Yawn.”

“For years we’ve heard moans that video-game movies are jinxed. Unfortunately, ‘Assassin’s Creed’ won’t lift that curse. Not even with stars like Michael Fassbender and Marion Cotillard, and the game‘s creator, Ubisoft, as a producer. If you’re unfamiliar with the game, you may be confused by what’s going on and why anyone would even bother playing it. If you have played, you’ll wonder how the moviemakers could mess things up so badly and squander the game‘s rich tapestry of stories.”

“There’s a lot to snicker at in ‘Assassin’s Creed,’ though maybe — to tinker with a quote from ‘Ghost World’s’ Enid Coleslaw — it’s so bad it goes past good but not quite back to bad again. There’s something sublimely ridiculous about a movie that begins with one of those instantly confusing text crawls, this one about the Knights Templar; where great actors (who, again, had just done the Bard) are forced to say things like, “The apple, it’s in your grasp!”; where the hero’s mission eventually involves a trip to Christopher Columbus’ tomb. It’s like a Uwe Boll video game movie (see: ‘Alone in the Dark,’ ‘Bloodrayne’) only with first-rate production values and actors who are the opposite of washed-up. When Jeremy Irons and Charlotte Rampling saunter in as the king and queen of evil or whatever, it’s hard to write it off as your normal everyday shambles. Whatever it is, it’s barely an ‘Assassin’s Creed’ movie.”

“It’s too elementary and obvious to claim that the shortcomings that exist in Justin Kurzel’s ‘Assassin’s Creed’ merely derive from the simple fact it’s based on a video game. While it can’t be disputed, the track record for triumphant endeavours of such film adaptations is remarkably low, that’s not why this film is such a mess. No, ‘Assassin’s Creed’ struggles because it’s a disjointed affair, absurd and irreverent without any self-awareness, taking itself far too seriously and lacking that vital injection of adventure.”

“Midway through the picture, I gave up rooting for anyone–and instead cheered the set designers whose dazzling 15th-century Spanish interiors and cool modern laboratories are, time and again, kneecapped by director Justin Kurzel’s fetish for smoke and dust. Man, nobody can win in this game. It’s borderline impossible to follow the plot of this incoherent mess of potentially beautiful images…”

“‘What the f— is going on?’ mutters Michael Fassbender‘s character through clenched teeth, reasonably early on in the course of this interminable film, based on the lucrative video game series ‘Assassin’s Creed.’ You can imagine each of its stars – Fassbender, Marion Cotillard, Jeremy Irons, Essie Davis – saying much the same thing while looking through the script, before being directed to the fee on the last page of their contract. It’s an action movie, with dollops of thriller and splodges of Dan Brown conspiracy; and hardly five minutes go by without someone in a monk’s outfit doing a bit of sub-parkour jumping from the roof of one building to another. And yet it is at all times mysteriously, transcendentally boring. I bet playing the game is much more exciting. But then getting Fassbender to slap a coat of Dulux on the wall of his hi-tech prison cell and monitoring the progressive moisture-loss would be more exciting.”