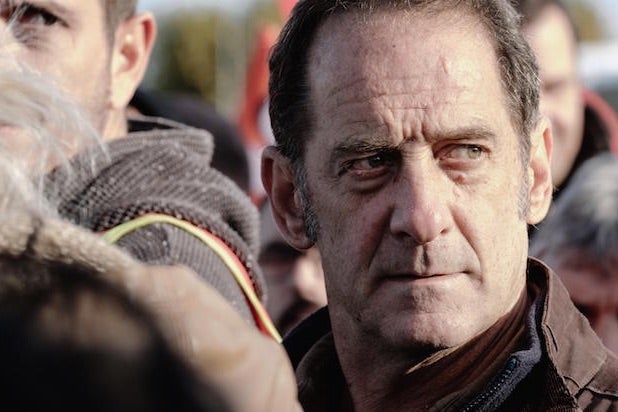 In a year that has offered a number of strong female performances and ensemble casts, this year’s Cannes Film Festival might have finally found a powerhouse best actor-award frontrunner in “At War” lead Vincent Lindon.

The only hitch? Lindon’s main competitor could be the memory of another performance of his.

The French star won the festival’s Best Actor prize for 2015’s similar “The Measure of a Man,” a semi-improvised social drama that teamed him with director Stéphane Brizé and troupe of non-professional thespians playing version of themselves in order to explore questions of class and economic displacement.

“At War” does the more or less the same thing — and like that previous entry, it achieves the same powerful, if somewhat self-limiting, results.

Lindon plays Laurent, a blue-collar union rep in southwest France. By the time the film opens, he and fellow workers are already two months into a labor strike, halting down all operations at the plant where they work in order to protest its impending shutdown and move to the cheaper labor market of Romania.

As its fiery title might indicate, the film moves forward as a series of tense interactions, doomed negotiations and stormy protests. There’s little reprieve in this escalating tale of futile anger and post-globalized doom, but Brizé nevertheless manages to wrangle the controlled chaos into a satisfying and straightforward narrative.

That was probably easier said than done, considering the film’s seemingly caught-on-the-fly nature and cast of real-life figures, listed under their own names in the credits. Brizé has no use for pie-eyed optimism – both he and his protagonist Laurent know that the 1,100 striking workers have little chance of holding on to their jobs, but then, what else are they supposed to do but rage against the dying of the light?

And in that sense, the director once again makes great use of Lindon’s brooding, virile screen presence. The labor reps will never upend the international system that has deemed him and his fellow workers acceptable collateral damage, but they can use their bodies and their voices to at least force their way into the boardroom to get told-off face to face.

And so each organized action leads to another pyrrhic victory as Laurent and his band shout and stomp their way up the corporate ladder. At one point, they meet with a high-ranking government official, who says that while government will do little to help them in their struggle to keep their jobs, it does offer them rhetorical support. Though Brizé plays the interaction as another frustrating roadblock for workers at risk of losing everything, the scene has the ironic effect of mirroring the film’s own intent.

“At War” will ultimately offer very little material assistance to the world’s forgotten women and men — but it can amplify their stories.