But it’s safe to say that Donald Glover and Co. know their Michael Jackson history very well, and incorporated it into what may be the greatest episode of FX’s “Atlanta.”

I appreciated their attention to detail because I covered Michael Jackson’s criminal trial, and learned lots about his singular life in the process. I’ve chatted with him, and once even went to his home, Neverland Ranch.

Some of the parallels between Jackson and Teddy are so obvious they barely need mentioning: pale skin, high voice, and living in a large, isolated home. Others might not be so apparent. Here are nine Teddy-MJ parallels that might not be obvious on first viewing (spoilers abound):

Wine: When Perkins first welcomes Darius (Lakeith Stanfield), he offers him a glass of water that never arrives. But a goblet of what appears to be wine sits on the table between them. Jackson used to call wine “Jesus Juice,” and drank it out of Coke cans in an attempt to preserve a wholesome public image.

Dionne Warwick: The same recording device that Teddy uses to remind himself to get Darius some water also includes a note-to-self about Dionne Warwick. (I think it says, “Finish that hat for Dionne Warwick.”) As Dionne Warwick once told Don Lemon, Michael Jackson called her “mom.”

Jackson had his own pet ostrich, who inspired one of the characters in a 1980s line of toys called “Michael’s Pets.” The ostrich was named Jeannine. Jackson’s “Leave Me Alone” video also featured what appears to be an ostrich: 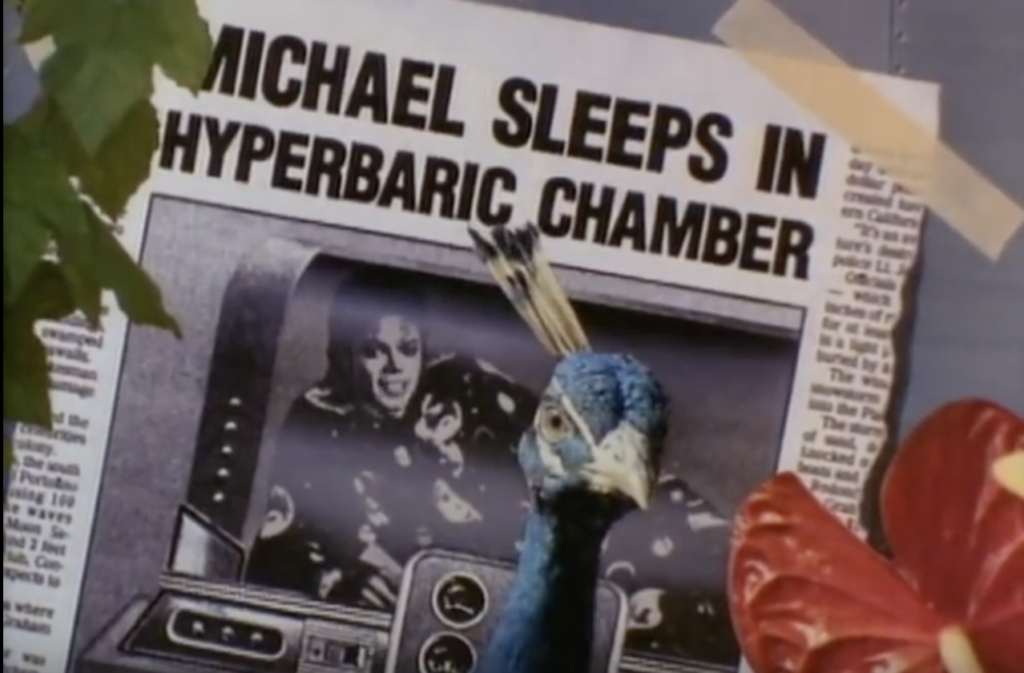 Skin condition: Teddy says his brother Benny “developed a rare skin condition.” Jackson famously told Oprah Winfrey he had vitiligo, “a skin disorder that destroys the pigmentation of the skin. It’s something that I cannot help.”

Chin cleft: This is a real testament to the “Atlanta” team’s attention to detail.  Jackson’s lighter skin and thinning nose were the most scrutinized aspects of his appearance as he aged, overshadowing another notable facial feature — the appearance of a prominent chin cleft he hadn’t had before. It’s a characteristic Teddy shares.

“Gift shop”/”trophy room”: Teddy’s strange room looked an awful lot like some of the rooms I got to poke around in during a visit to Neverland Ranch. One room was packed with dolls and mannequins dressed as superheroes and film stars. Another had full of shelves of videos, including Disney favorites, that made it look like a Blockbuster franchise.

It should be said that Neverland looked a lot more fun than Teddy’s creepy old mansion: It had an arcade that blasted rap songs with the curse words bleeped out, a menagerie of exotic animals, a mini amusement park and two trains, among other delightful sights.

Abusive dad: Teddy says his and Benny’s father used to beat his children to teach them “to be good at life.” Teddy endorsed this technique, saying, “To make omelets you have to break a few eggs” — which may be a callback to the broken ostrich egg.

Joe Jackson also famously beat his children, and Michael Jackson explained, often, how much of his adulthood was an attempt to recapture a childhood he never had.

Okay, maybe that’s obvious. But the “omelets” scene is also important because it establishes that Teddy isn’t supposed to be Michael Jackson. Teddy lists his own father and Joe Jackson among the great show-business dads, which means their offspring co-existed in the same world.

Also Read: 'Atlanta' Writer on the Insane Reality of Alfred Being Held 'Hostage' by a Barber

Blood on the floor: We see some by the end of the episode, and Jackson released a single titled “Blood on the Dance Floor.” Too much of a stretch? I don’t know.

So did no one else catch that Michael Jackson's first song was 'Ben' (read music lyrics) and Teddy Perkins brother name was Benny. #AtlantaFX